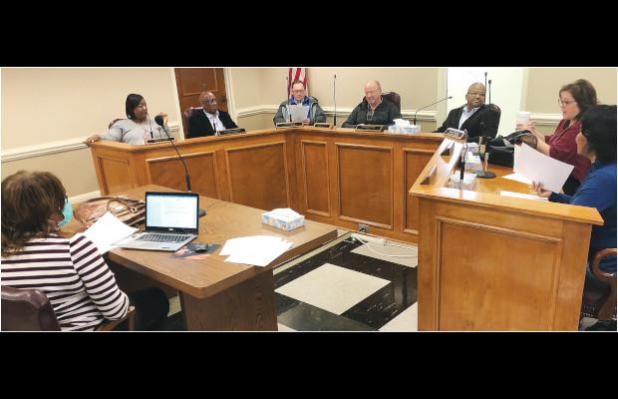 Photo by Barry Burleson
Discussing the Coronavirus-related proclamation Monday morning during a special-called meeting of the mayor and board are Shirley Byers (foreground, left) and then (from left) Bernita Fountain,LennellLucas, Mark Miller, Tim Liddy, Kelvin Buck, Christy Owens and Belinda Sims Hollowell.

Slowing the spread of virus

The City of Holly Springs has taken steps to do its part in helping stop the spread of Coronavirus.

The mayor and board of aldermen held a special-called meeting Monday at 8 a.m. They unanimously passed both a resolution and proclamation of a local emergency and a stay-at-home order due to the COVID-19 pandemic.

"We want to do all we can to keep people in our community safe," Mayor Kelvin Buck said. "And the best way to do that is to follow the guidelines of the CDC (Centers for Disease Control) and the state.

"The president and the governor have already declared (the state of emergency) and so has the county, and the city needs to do the same."

The document's passage will allow businesses to calculate losses and apply for loans due to economic injury during this pandemic, Buck said.

It closes nonessential businesses, plus social and church activities during this time, particularly following the guidelines from the national level of no gatherings of groups more than 10.

If possible, nonessential businesses like restaurants and others listed in the proclamation can use drive-through windows, curbside service or delivery.

Continued operation of essential businesses is allowed. But those businesses, too, are mandated to close waiting areas where more than 10 people might gather.

They, too, if possible, should utilize drive-through, curbside service or delivery. These include pharmacies, banks, grocery stores, hardware stores and others.

"Most businesses will be able to operate, under certain conditions," he said. "We're not closing restaurants, just no gatherings inside."

Alderman Christy Owens said it is "our goal to maintain the safety, health and wellbeing of our residents."

Shirley Byers, city attorney, said on Monday morning the surgeon general had said in the next two weeks the situation will likely get worse.

"We have to try to prevent and that's the purpose of this resolution," she said.

Mayor Buck said "good common sense" will be used when dealing with businesses during this time.

"The language is permissive," he said. He said most businesses, particularly restaurants, have already gone to curb-side service.

"We really want to discourage a lot of moving around the city unnecessarily," Buck said.

The resolution and proclamation will be for 30 days.

"Hopefully, we can stop it (the stay-at-home order) earlier," he said.

The mayor and board of aldermen will readdress the emergency resolution and proclamation at its next regular meeting, Tuesday, April 7.

The resolution and proclamation both passed unanimously on a motion by Tim Liddy and second by Owens. All board members were present.

To read the full resolution and ordinance, see Section 2, Page 6.