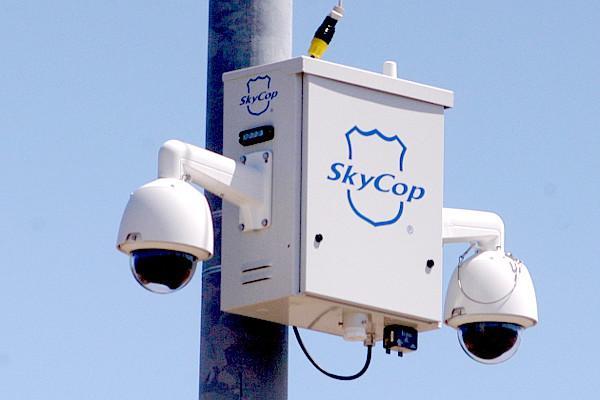 Photo by Barry Burleson
The Holly Springs Board of Aldermen recently approved the purchase of two more SkyCop cameras for the city.

SkyCop cameras in use

The Holly Springs Police Department is making use of SkyCop surveillance cameras in selected areas of the city.

The cameras have good resolution and have already helped solve some robberies, according to Capt. Daryl Bowens.

The cameras operate in real time and areas can be observed either at the police station or from an officer’s cell phone, Bowens said.

The board of aldermen authorized the purchase of two additional SkyCop cameras during the recent meeting.

In other business, the board of aldermen:

• promoted Ben Ivester from lieutenant to captain at the fire department.

Also, Dan Quick was promoted to training officer and the board approved hiring Leland Reed as assistant fire chief in the Holly Springs Fire Depart­ment. Reed, previously the fire chief in Byhalia, is already certified in code enforcement and as a fire inspector, according to Rodney Crane, chief of the de­part­ment.

• authorized payment of $41,789 to PNC Equipment Finance for lease payment of a fire truck.

• approved payment of $68,770 to the Mississippi Municipal Worker’s Compen­sation Group.

• passed a resolution authorizing and directing the issuance of Electric System Revenue Bonds of $3 million for the upgrade of the Ashland Substation.

The board also authorized travel for: