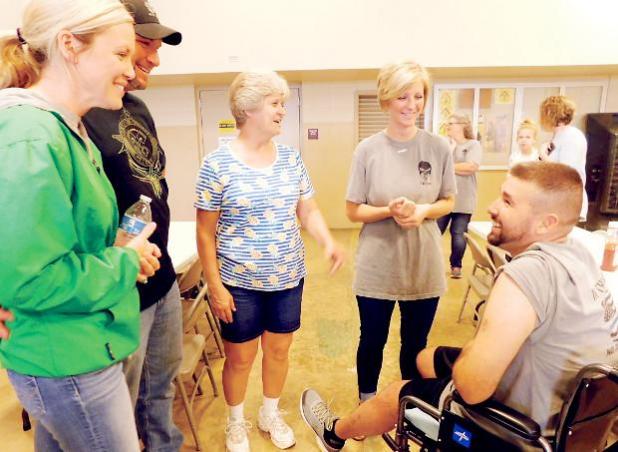 Sharing smiles with deputy Daniel Tatum and his wife Morgan (standing at right) are, from left, Lindsey and Joe McGee and Lynda Williams.

The Marshall County community proudly gathered in support of injured deputy Daniel Tatum Friday. He was shot in the apprehension of a suspect at a residence on Hunters Run Drive April 12. Tatum said he does not know how many times he was shot.

“But I have seven holes in me,” he said.

His worst injuries were to his left arm, shoulder and leg and to his right thigh, he said.

Sheriff Kenny Dickerson and his team prepared fried catfish and the fixings for the fund-raiser and Terry Byrd, a long-time friend, cooked spaghetti, slaw, green beans and smoked 301 Boston butts for the event.

In expressing appreciation for Tatum, Byrd said he worked three days straight on the food.

“Believe me, you are a friend of mine,” Byrd said.

Dickerson also expressed his appreciation at the selfless service Tatum has performed in the line of duty.

“We are proud of him,” Dickerson said. “We do benefits for all who need support. It’s special to have you back here and back home. We are going to be here for you every step of the way.”

In expressing the fund-raiser as a community event, Dickerson said, “It’s not a big I; it’s a we. Thanks to everyone.” “And thank goodness it is God’s will for us every day to be here. We wouldn’t be here today had it not been for God looking over us.”

Dickerson, himself, came close to death in a car accident in Byhalia on March 8, 2014, when his vehicle was struck on the passenger side at the intersection of Stonewall Road and Highway 309. It was months before the sheriff recovered enough from his injuries and subsequent surgeries to resume his duties.

Multiple law enforcement agencies responded the night Tatum was shot as he entered a house where a suspect had fled, following the chase of an automobile on Mt. Zion Road.

Tatum pursued the Honda whose driver first refused to produce identifying information, cursed Tatum and sped off with two passengers in the vehicle with him, according to Sheriff Dickerson. The incident ended on a dead-end road off Lee Creek Road with the shooting of deputy Tatum and a three-hour standoff at the residence. Authorities pled with the suspect to surrender peacefully and finally gassed the house, Dickerson said. The suspect, Randy Vaught, 33, of the Taska Road area, in the end came out of the house and into the front yard, fell to his knees and killed himself with his own weapon, according to authorities.

Tatum has been with the Marshall County Sheriff’s Department for five years, the first couple of years as a patrol officer and the last couple years as a narcotics division investigator.