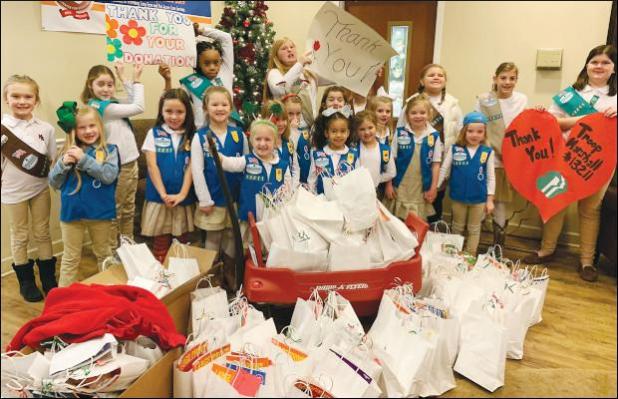 For the first time in many years, Marshall Academy is serving as host to a Girl Scout troop with rousing success.

Since November, 26 girls in grades first through sixth have formed multi-level troop 13211, with Dr. Elizabeth Smith as troop leader and Emma Woods as co-leader, and the group is already earning badges.

“We were kind of surprised to be nominated to lead,” said Smith, whose niece Annie Taylor, a Daisy Scout, volunteered Smith for the job. “Emma was the only mom among us who had been a Scout, so I told her she had to help me!”

Most girls in this particular troop are students at Marshall Academy, but several girls from area schools have also joined and made new friends. Once the troop was officially formed, Smith and Woods got to work getting girls and parents signed up, vests and sashes ordered, patches sewn on and meetings planned.

Smith said it has been a whirlwind since the process started.

“We wanted to get going on some activities for the girls,” she said. “We didn’t want the holidays to pass us by without getting involved, so the girls came up with some ideas and we got to planning.”

Smith’s niece Annie had heard about visiting nursing homes in the initial interest meeting at school, and she and her friends begged “Bop” (Smith) to take them to a local facility. When it was brought up at the first meeting, the girls decided to take it even further. They wanted to bring gifts, as well. A mother in the group contacted Trinity Mission Health and Rehab about coming to sing carols and bring gifts. The older members of the troop made posters asking for needed items, and the younger girls made cards for each resident.

“The whole thing just sort of caught fire,” said Smith. “The girls were calling grandparents and other family members. The school posted it to their Facebook page, the school’s media team interviewed the girls for Instagram, the girls bugged their classmates to bring in donations for a couple of weeks. They are some persistent young ladies!”

The troop had hoped to provide some items for needy residents at Trinity, which houses 116 patients. However, after the word about the drive got out, donations started pouring in.

“Before we could blink, we had enough to make a gift bag with several items for each resident at Trinity, but the items didn’t stop coming,” Smith said. “Before long, we had enough for all 41 residents at Christopher’s and then all 61 at Byhalia. In just a couple of weeks’ time, 26 little girls provided a Christmas present for every single nursing home patient in the entirety of Marshall County.”

On December 12, Troop 13211 headed to Trinity to deliver gifts and sing carols.

Co-leader Woods, whose daughter Corrine is a Daisy Scout, said the experience was heartwarming.

“The girls just enjoyed spreading some holiday cheer,” Woods said. “Just looking at them coming in the door in their little uniforms with big smiles made everyone there happy.”

Woods was a Scout from kindergarten through sixth grade.

“Being a Girl Scout was one of the best experiences of my life,” she said. “I wanted to be able to give that to my daughters and the girls of this community, as well.”

Woods helps lead the Daisies and teaches the girls all the songs and traditions that are hallmarks of the Girl Scout culture.

“We sang our friendship song to the residents at Trinity,” she said. “That’s what it’s all about, being friends and spreading happiness.”

For the visit, the girls received a nursing home visit patch. But when Heart of the South, the national organization’s council for this area, heard what the girls had done, they bestowed on them the One Heart patch. According to the organization, One Heart is the underlying principle for Girl Scouts Heart of the South that encourages members to “practice kindness and compassion, seek common ground and understanding, and serve our neighbors and communities, while living the Girl Scout Promise and Law.”

“This is the principle we most want to instill in these girls,” Smith said. “They are already good little humans, and we want them to grow up to be strong women of courage, kindness, and compassion. This mission showed them what One Heart is all about.”

In addition to the nursing home gift drive and visit, the girls also participated in the recent Holly Springs Christ - mas parade on December 7.

“This is where the daddies got to really join in and help,” said Woods, whose husband David helped to create a float on a large trailer that fit all the girls and troop volunteers.

“They were so proud to wear their uniforms for the first official time. They were perfect the entire evening and sang songs and threw candy and had the best time. That kind of fellowship and friendship is rooted in what the organization is about, and I’m so glad the town got to see them be together like this.”

The troop is busy planning its next mission and getting ready for cookie season in February.