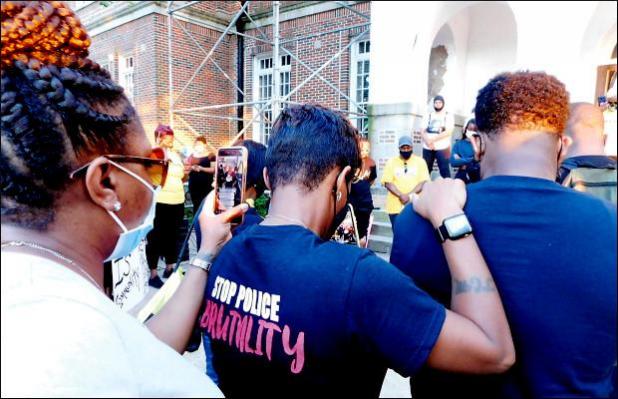 Photos by Sue Watson
Participants in the peaceful protest unite in prayer outside the Marshall County Courthouse. 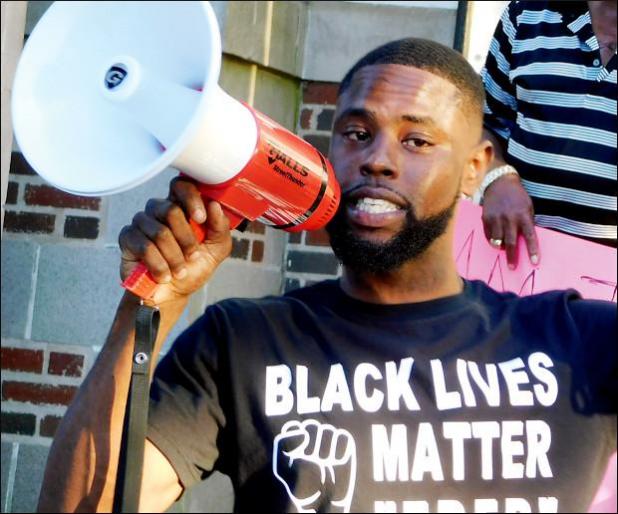 Kevin Shipp, one of the organizers, talks to the crowd.

The march from Rust Avenue up Memphis Street to the Marshall County Courthouse was framed by banners and slogans associated with the worldwide movement to speak out about excessive force used by law enforcement, sometimes resulting in the death of African Americans.

The event was organized by Brianna N. Hollowell, Jamarr Walton and Kevin Shipp.

Hollowell said she has seen hundreds of hashtags about African Americans who have been victims of police brutality.

"Enough is enough," she said.

But in Holly Springs the police department shows a dedication to make the community better, Hollowell said.

Local leadership is a blessing but nationally there is a problem, she said.

This peaceful march was about standing in solidarity against police brutality and honoring the lives lost, Hollowell said.

She found support for the local march on Facebook where Shipp and Walton also shared her vision.

"I selected speakers based on their own unique influences in the community," she said.

Andre Jones is a leader in the school and plays a vital role with the youth of the community.

Flora Isom Hollowell is described as "a powerhouse." Her wisdom encourages others, Hollowell said.

Devin Riddle shows commitment and willingness to work to unite the community for change, she said.

As for Hollowell, she said, "Anything I do, God will always be at the forefront.

Pastor Deldrick LeaSure was chosen by God to lead His people, she said. He spoke about love, accountability and religion and closed with a powerful prayer that touched all hearts.

"My goal of peaceful protest was achieved with blacks, whites, men, women, children, police officers, fire fighters, a former governor, elected city officials and county officials," he said. "This is a testament to what we can do if we come together as a community in peace. This is only the beginning."

During the march to the courthouse, participants took a knee for eight minutes at Park Avenue. Then moving onward, the group chanted slogans now associated with the movement: Hands Up, Don't Shoot! I Can't Breathe! No Justice, No Peace! Choose Peace!

As all gathered around the north face of the courthouse steps, selected speakers made their voices heard.

Andre Jones opened the program with the remark, "We've got to stand on love."

He said African Americans have not been compensated for all the work they have done in the United States.

"We've got to stand on what's right," he said. "We always choose love as a race. The only thing we ask for is equality. It starts right here in this community."

Flora Isom Marion said, "In order to restore our land, we have to walk in unity. It's about doing what is right. I love all races. Let the racism end today for both races. God made sacrifices for us. Marching is not enough."

Pamela Boga, organizer of Mississippi Matters, Too, said "It takes the police chief, the mayor, the aldermen to do what it takes. There's a need in Mississippi. We need to stand together as a black people. It hurts my heart to be here.

"It starts with us. We haven't been able to breathe for years. It didn't start with (George) Floyd. It needs to stop." Former Mississippi Governor Ronnie Musgrove spoke briefly.

"It's going to take all of us to make the kind of life we all need," he said. "Keep walking and talking until we make the change for Mississippi."

Holly Springs Police Chief Dwight Harris pledged that on his watch there would be nothing to worry about (injustice) in Holly Springs.

Jamarr Walton said he had a vision of this happening years ago.

"It shouldn't take tragedy, take death, take chaos, and turmoil to bring us together," he said. "Every time we have a catastrophic event we pull together."

He mentioned how the country pulled together after the attack on the Twin Towers of the World Trade Center, known as 9/11.

"We have to do better by one another," he said. "Martin Luther King teaches about love. God says how can you say you love me and don't respect each other. I bleed the blood of Jesus on Holly Springs, Mississippi. Love starts at home."

"Holly Springs, we have a problem," he said. "The only way we are going to grow is to unite."

He urged Mayor Kelvin Buck to get out in the community and talk to folks.

"If we are going to make a difference, it starts now," Riddle said. Jimmy Young, who held a sign, "Ain't I a Man," harking back to the 1851 Sojourner Truth speech. "Ain't I a Woman," said, "We all need to get God in each other. This ain't no white man thing.

"It's a bad situation. I'm just a country boy. I pick up paper (for the Buildings and Grounds Department). I love my mayor. We got a good mayor. Look in the mirror when you get home."

"We can't let the movement die after tonight," he said. "We've got to keep the movement going. The reason I'm not in prison is because I never got caught.

"We've got white brothers and white sisters who need our help. We refuse to write our black brother off (give up on him) because he smoked dope."

LeaSure said he pled with nine black brothers and told them they were going to die if they didn't change.

"They were each murdered by another black brother," he said. "All nine are dead. How many black brothers have died on your watch and you haven't said anything? I will make sure on my watch he don't die."

In prayer, LeaSure thanked The Father for His protection, provisions for every person and the presence of everyone.

"I plead the blood of Jesus over our mayor, chief of police," he said. "God, we shall overcome through you."