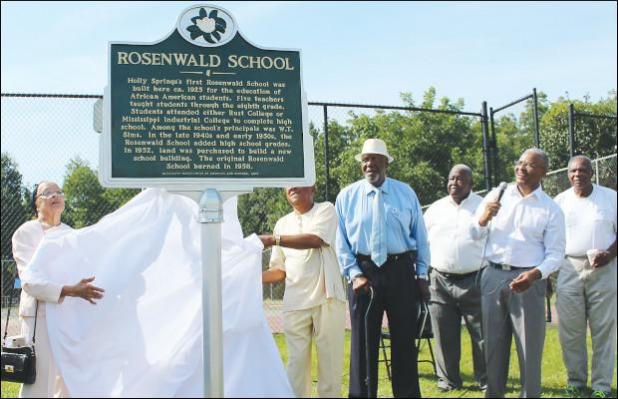 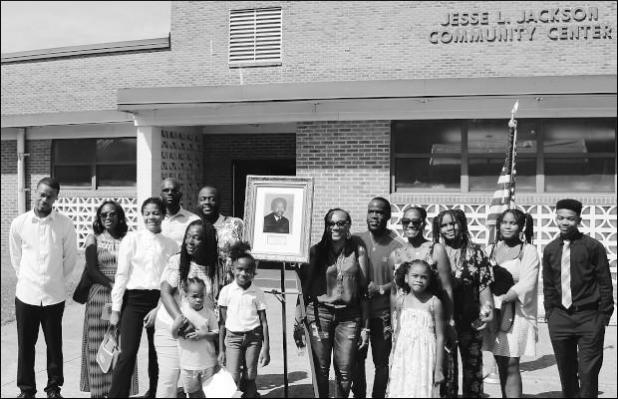 Courtesy photo
The old gymnasium at Sims School was named in honor of the late Jesse L. Jackson, science teacher, bus driver, barber, tax preparer, gardener, ballgame official, scout leader and Little League coach. He mentored four generations. A quote, “A hundred years from now it will not matter what my bank account was, the sort of house I lived in, or the kind of car I drove…but the world may be different because I was important in the life of a child.” Some of his family members are pictured in front of the Jesse L. Jackson Community Center. 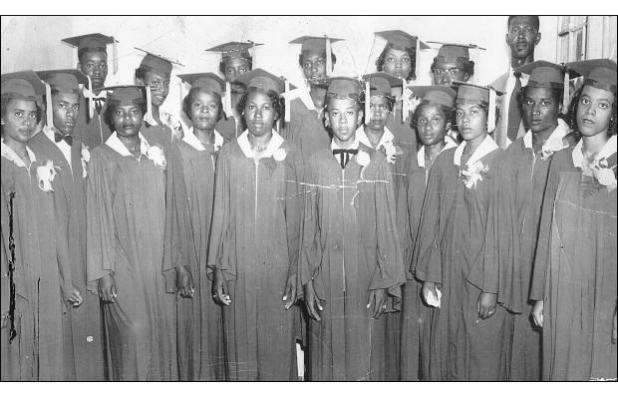 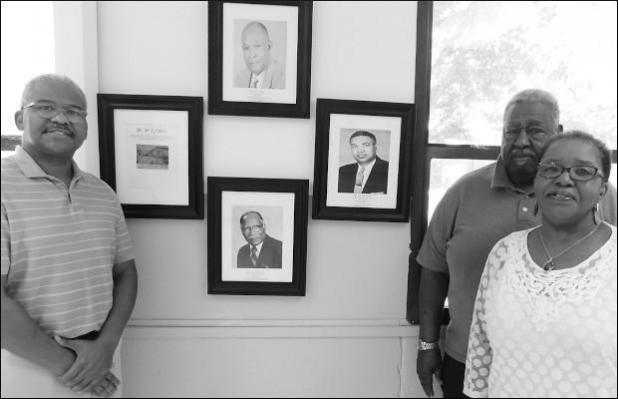 Photo by Sue Watson
Pictured with some of the pictorial tributes to principals on display in the library at the old Sims School are (from left) Mayor Kelvin Buck and Russell and Johnnie Johnson. 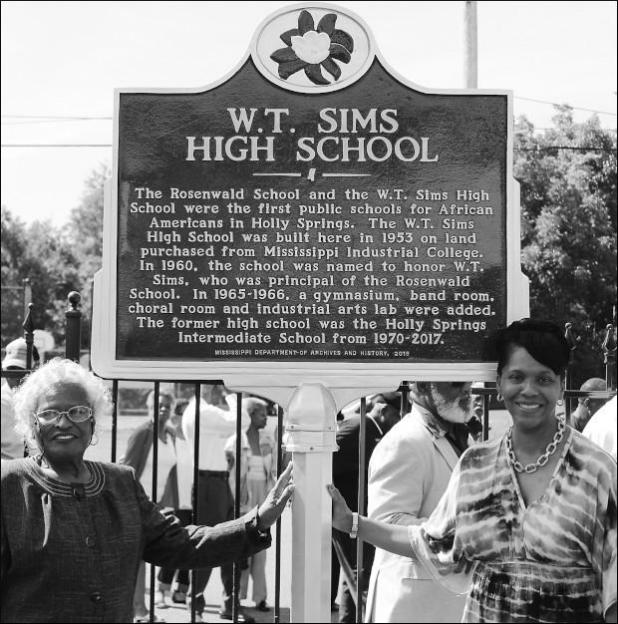 Courtesy photo
From left are Florentine Walton Evans, Charles Terry (in back), and Belinda Sims Hollowell, great-neice of W.T. Sims.

It has been a labor of love that will last many, many years.

The project of dedicating a library at the old Sims School, to store the memories of those who attended the Rosenwald School and W.T. Sims School, is the brainchild of Russell Johnson. He birthed the idea in December 2018.

Johnson is a member of Holly Springs Historic Preservation Commission, the Marshall County Industrial Development Authority and former alderman for the City of Holly Springs. He is also a former teacher and coach, with 40 years of service in the Holly Springs School District.

When he started the project, there were no pictures, no keepsakes. He contacted those he remembered who went to Rosenwald and Sims asking for photos and keepsakes, plus donations for the project. Then he asked the City of Holly Springs to donate a room that will serve as a museum for all the artifacts and photos.

“(The late) Lois Swaney got me interested in this project,” Johnson said. “She shared stories with me that she remembered about Mississippi Industrial College and Rust College football games.

“When I started looking, I couldn’t find any pictures. The idea arose through discussions at the Preservation Commission.”

Donations provided the money to install historic markers at the Rosenwald and W.T. Sims sites. And money was left over to pay for frames for pictures and keepsakes.

But it is the people, very beloved and appreciated, whose lives and contributions are honored by this endeavor.

W.M. Fisher was the first principal at Rosenwald, followed by W.T. Sims.

Sims was born in Tate County but graduated from MI College and served as principal at Ripley and later in Holly Springs at Rosenwald School and at W.T. Sims High School, named in his honor. His portrait is on display at the Ida B. Wells-Barnett Museum and Cultural Center on Randolph Street in Holly Springs.

Another early principal at Sims was Joseph H. Ford, who served from 1968 through 1970 and became the principal of Holly Springs High School when Holly Springs School District was integrated.

Also preserved are copies of deeds to the W.T. Sims School property that was purchased from MI College in 1952.

The Rosenwald School on West Valley Avenue burned in 1958 and another school building was erected.

“They called it Faith School, built in 1959-60, because they didn’t have the money to pay for it,” Johnson said.

Initially, Rosenwald Schools carried students to the eighth grade and they went to high school either at MI College or Rust College during segregation.

Class composites are available starting with the Class of 1955 and going through 1970. The last graduating class of W.T. Sims was in 1969. Afterward, Sims became Holly Springs Intermediate School and graduations were held at Holly Springs High School.

District 1 supervisor Charles Terry is shown in the Class of 1969, the last class to graduate from Sims High School.

There is a photo of the first graduating class at Rosenwald, which went to the eighth grade.

Some students of Rosenwald included Madora Anderson, a member of the 1953 graduating class at MI High School, mother of Johnnie Ree Johnson. Former mayor, the late Eddie Lee Smith, was in the last graduating high school class from Rust College, along with classmate, the late Ruby Owens.

Johnson attended Rosenwald in the fifth and sixth grades and then moved to Memphis, Tenn., where he completed high school at Melrose.

R.C. Anderson was a graduate of the Class of 1959 along with J.T. Rayford and Robert Penilton. Willie Boyd and Levan Miller were in the last class – 1960.

The keepsakes are on display, museum-style, in Frazier I at the Rosenwald/W.T. Sims Historical Library.

Also on display are some photos of ball teams. Some notable graduates include W.B. Foster, who played with the Memphis Red Sox, and Clarence Beard and Curtis Isom, graduates of the Class of 1969, who were drafted by the Kansas City Royals.

There are no photos of the first bands and the first choirs and cheerleaders in the collection. (Johnson requests that anyone who has any of these pictures send them via email to john8459@bellsouth.net.)

“Our goal was to preserve the history of Rosenwald and W.T. Sims schools,” Johnson said. “Nowhere in Holly Springs do we have this.”

Johnson’s mother, Cornelia Johnson, and his sister, Mary Scales, both worked at Rosenwald. His mother taught at Rising Star until the consolidation of the church schools in 1955. Both were school teachers.

A video dubbed Historic Moments was made at Sims campus in which those who remember the days of the 1950s told their stories.

Copies of the video are available from Bobby Johnson at Rust College or Mayor Kelvin Buck at Holly Springs City Hall.