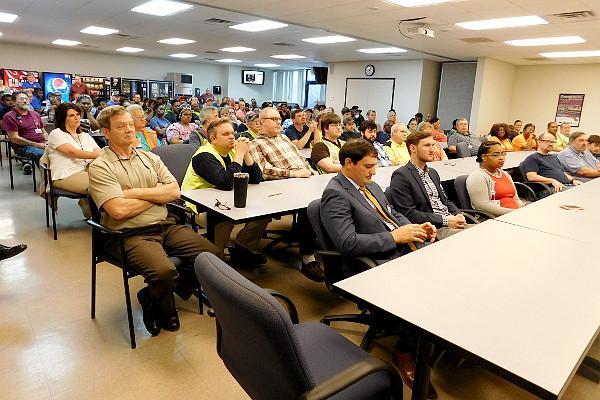 Photos by Sue Watson
Employees of Parker Hannifin, Racor-Division, in Holly Springs gather for the celebration.

Parker Hannifin is the global leader in motion and control technologies, founded March 13, 1917.

Parker has four manufacturing facilities in Mississippi – Batesville, Madison, Olive Branch and Holly Springs. All four facilities are different and in different divisions.

Local elected officials and members of the community joined Parker’s 125 employees to hear about the founding of the company and how it has grown during hard times as well as good financial times.

“Parker touches you in every part of your life, whether you are driving a car, drinking a glass of water, talking on a cell phone, if it moves, we make it,” Day said.

In May, Parker will have been in Holly Springs 15 years. The company is the largest employer in the manufacturing industry in the city and county.

Day said a $4.3 billion buyout of Clarcor, a manufacturer of mobile, industrial and environmental filtration products, headquartered in Franklin, Tenn., made Parker the “King of Filtration” with the acquisition.

“What this means here, you put two multi-billion dollar companies together, it means change,” Day said.

In Holly Springs, the facility is located on 60 acres.

“We do not worry about the future,” Day said. “We know we are good at what we do here. We do our job and make sure Holly Springs is strong going forward as we start clicking on the next 100 years.”

Parker has always been at the center of the action, providing advancements in technology during world wars, the exploration of space, and innovations in nearly every man-made machine that moves.

Sen. Bill Stone expressed joy at being at home “after three months in the twilight zone in the capitol.”

He said Parker is “a great American, Mississippi, and Marshall County success story.”

Rep. John Faulkner praised Parker for its continued effort in Holly Springs and as “a long-standing partner in the state and its commitment to Holly Springs.”

Mayor Kelvin Buck thanked Parker for its 15-year presence in Holly Springs, built on successful and hard-working employees. Reflecting on the current unemployment rate in the county at 4.3, the mayor said more people are working in the county due to Parker’s location and expansion in Holly Springs and Marshall County.

“There were ups and downs in those 100 years,” Buck said, reflecting on a company video shown to guests and employees chronicling the progress of the company.

“You have to work your way through wars, depressions, whatever it may be,” he said, keying in on how Art Parker and his descendants kept the company together in difficult years.

“The state partners with companies,” Buck said. “I’d like to keep the ones committed to us happy.”

Christy Owens, executive director of the Holly Springs Main Street Chamber and alderman of Ward 4, praised Parker for the jobs they bring to the area.

“The more birthdays the merrier,” she said of the company.

Owens noted the engineering innovations the company has made and the many products they make, as well as how Parker gives back to the community.

As community-minded and community-committed workers, “you and everybody who comes to work every day are where success is measured from,” Owens said.

She said Parker invests in the community and provides more than jobs, but also careers.

Justin Hall, executive director of Marshall County Industrial Development Authority, noted how important it is to have jobs in Holly Springs and Marshall County.

“The commitment Parker has made to the community is very impressive,” he said.

“Our hats are off to you and please continue to do the great work you do in Marshall County,” he said.