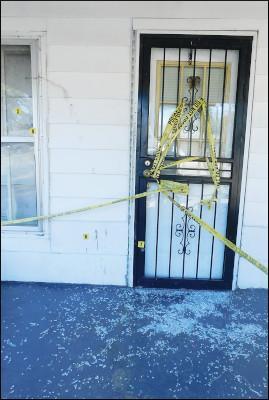 Photo by Sue Watson
Glass is shattered at the front entrance to the house, and numbers signify where some bullets struck.

One person is dead and two injured following a shooting on Moss Avenue Thursday, Oct. 17, according to Holly Springs Police Chief Dwight Harris.

The incident occurred at about 5:04 p.m., he said, in the 400 block of Moss Avenue, off South Chesterman Street.

Jametries LaSha Moore, 23, was pronounced dead at the scene by coroner James Richard Anderson at 5:38 p.m.

Harris said the shooting took place outside the residence where a number of people were gathering.

Moore was found unresponsive in the back room of the house, Harris said, where officers attempted to render first aid, but were unsuccessful in reviving her.

Two males at the scene sustained gunshot wounds and left in a personal vehicle, he said.

Jeremy Young, 30, was taken to the Regional One Medical Center in Memphis, Tenn., where he was treated for a gunshot wound and later released to the custody of agents with the Shelby County Fugitive Task Force and held in jail at 201 Poplar Avenue. Young was charged in Holly Springs with first degree murder, in connection with the shooting death of Moore, the night of the incident, Harris said.

The third individual wounded has not been identified by law enforcement, Harris said.

Possible charges are pending regarding one or more subjects on the scene during the incident.

An aerial search of the area the day after the shooting, by the Marshall County Sheriff’s Department helicopter and ground patrols, located a vehicle behind a residence on Hudsonville Road that is alleged to have belonged to a suspect, according to Maj. Kelly McMillen with the sheriff’s department.

A number of shots pierced windows, the wall and front door at the residence where the crime took place and the glass on the front security door was shattered.

In a statement released by Harris Monday, he expressed personal concern regarding crimes of this nature and their affects on the community.

“Holly Springs is a small community loved by all of us,” he said. “The individuals involved in these types of criminal activities will be held fully accountable.

“This is something we will never get used to and that we will never stop fighting, because it is senseless. It hurts the elderly, the youth, the neighborhoods, everyone. We are sick of it. And we’re coming to get you.”

This is the second shooting death in the South Chesterman Street area this year. In March, Edheldridge Balfour was killed in a assault-rifle barrage of fire in the Chatham Drive area behind The Hut.