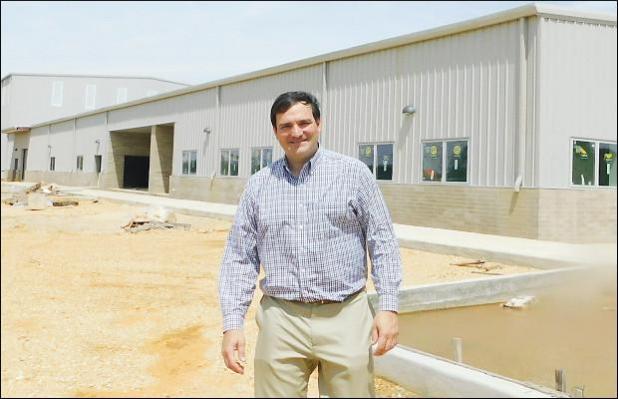 Photo by Sue Watson
Justin Hall stands outside the workforce center during construction. It will open soon at Chickasaw Trail.

Marshall County's day in the sun

The foundation was laid decades before the first project was on the ground at the Chickasaw Trail Industrial Park.

The vision was seen by the Marshall County Industrial Development Authority Board and people like Mike Thornton, Del Stover, Bill Renick and Bill Mobley.

While the first boundaries of the park, about 2,600 acres, were being laid out and agreements were being made with landowners to put their property in the park, Justin Hall was a young man in college studying political science at Ole Miss. In summers and at other times he became acquainted with construction and farming by working for his two granddads, Bobby Hall, in construction, and Joe Cooper, a cattle and row crop farmer.

His first job in the county came in 2005 working in Marshall County for a construction and engineering company doing feasibility studies and wastewater system design to handle water treatment in the industrial park. Mt. Carmel Road was just a pig trail and the sewer line was trailing right up Mt. Carmel Road to ultimately connect with the first two sites that were developed in the park.

"I always gravitated toward construction," Hall said. "While in college I worked for local contractors and developers and got interested there."

Excel was the first client to build a warehouse in the park to serve Carrier air conditioning, products that were being manufactured in nearby Collierville, Tenn.

The next client to locate in the park was across the road from Excel. ASICS is a sports apparel company that makes tennis shoes and other apparel.

Hall came on board first as manager of the Holly Springs/Marshall County Airport and project manager for the Marshall County Industrial Development Authority. It was not long until he took the reins of the IDA, which had its first taste of big success and was bucking for more.

Soon the park expanded to about 4,000 acres.

William C. Adair entered the picture, selling property adjacent to the park to NFS to develop an intermodel yard at Rossville, Tenn. Adair, long accustomed to the land development business, partnered with Panattoni Developers in Tennessee, and soon a great leap took place. Roxul, a Danish insulation manufacturing company, liked the deal it got in Mississippi and built a state-of-the-art, stone-wool insulation facility. Soon afterward the company built a facility to manufacture ceiling tiles, Rockfon, opening up another line in Marshall County. Now both facilities have taken on the parent company name, Rockwool.

"Roxul was a very competitive project that did a multistate search and ultimately chose Marshall County," Hall said.

Before one warehouse was completed Panattoni always had another spec building in its sights. Niagara Bottling moved in around the corner from Post.

The Mississippi Development Authority and Marshall County IDA, the board of supervisors and a host of partners had reached critical mass.

McCormick Foods went in on Highway 302 just south of Rockwool.

Cooper Tires decided to build another warehouse in Mississippi. The state and county worked feverishly to extend utilities to the Cooper Tires site. That infrastructure extended, three more manufacturing and distribution centers fell in place.

Amazon, then Corelle, and then Kellogg's rounded out the construction site adjacent to Cooper Tires.

The most recent addition is Nike, a warehouse and distribution center built by H&M Construction, the company that built ASICS. H&M has proposed breaking ground on another spec building in 2020.

"Roxul was the catalyst to help beef up the infrastructure," Hall said. "We pursued grants through the Mississippi Development Authority and the Appalachian Regional Commission to build out the infrastructure to the park."

What was the magic wand that caused this all to fall in place in a short 13 years?

"A very important part of this puzzle is the construction of I-269 in about 2009," Hall said. "And in my opinion, the rail yard plays an important role in regional development.

"I think we had a unique property and story to sell, but when I-269 opened, it started telling the story that there were not only quality sites, but freight could move around Memphis, Tenn. Memphis is the central distribution point in the nation because of the intersection of a number of types of transportation - highway, air, water and rail.

"By the time I-269 got here, I think everybody could see it. We may have been thought of as a little too far out from major roads and rail. At about the time 269 came to Marshall County, an explosion of industrial and manufacturing development took place. Panattoni began a series of site development and spec buildings.

Smaller manufacturing companies like RBR Manufacturing brought high-tech agricultural equipment manufacturing, such as fertilizer applicators, into the park in 2009-2010. Mid-South Ag Equipment is located near the park on Highway 302.

The cluster forming north of Highway 72 fell into place when Cooper Tires announced February in 2018. MDA offered improvement grants to extend the road and utilities across Highway 72.

That cluster alone has created 2,000 new jobs on one site. Panattoni built every one of those.

"The Springs is a very exciting project because it offers rail and interstate access to prospective business and has direct access to the Holly Springs-Marshall County Airport," Hall said. "All necessary utilities are currently in place, and it is the first BNSF certified rail site in the southeastern United States."

"We have potential for new site development for decades to come," Hall said. "Leadership and long-range vision have been critical to our success. I credit partnerships between the IDA board and Marshall County Board of Supervisors for creating the atmosphere to get this off the ground."

The county is also seeing growth in existing manufacturing facilities such as Parker Racor. And existing fabricators and manufacturers continue to grow within the county, creating quality job opportunities for residents.

The reputation of Marshall County is spreading far and wide as a good location to set up shop.

"By the time we sit down and talk to prospects, they have already done their homework," Hall said. "It is past success in creating relationships with broad partners and with utility providers and site consultants that is aiding attracting new partners who want to invest in Marshall County. They (companies) understand the product and the community where we are generating constant activity to attract new projects.

"Leading forward, as the county and state continue to invest in infrastructure and with the partners building a well-trained and skilled workforce, the sky is the limit," Hall said.

"We have the tools to do that today."

Total capital investment by companies in the Chickasaw Trail Industrial Park exceeds $950 million with expectations to exceed $1 billion by year end 2020. Approximately 4,000 full-time jobs have been created in the park.