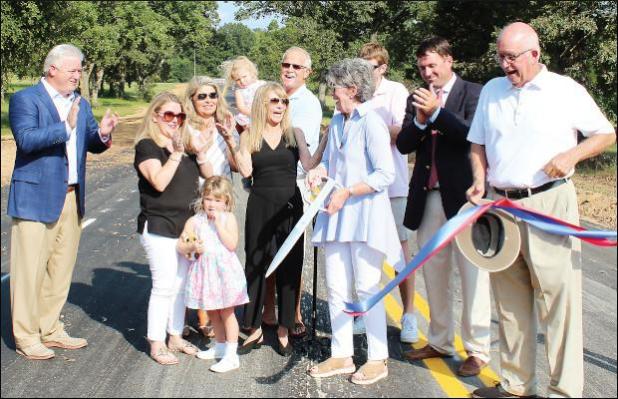 Headmaster Barrett Donahoe welcomed everyone to the ribbon-cutting ceremony and thanked all in “the MA family” for their support of the school.

Kent Smith, president of the MA board of directors, voiced appreciation to the Swords family, long-time supporters of the schools.

“There are no better supporters or benefactors of Marshall Academy than the Swords family,” he said. “Mr. Frank (who died in 2012) and Ms. Vicki have generously donated resources to our school over the years to help us on many projects.”

He added that they have contributed without ever wanting publicity or special thanks.

“When we started the project for the new entrance, we went to Ms. Vicki for the land,” Smith said. “She immediately agreed to donate the property.”

But this time around, she did make a request.

“She wanted to donate the land in memory of a particular Marshall Patriot, Rob Warren (who died in 2006),” Smith said. “Rob graduated from Marshall Academy and will forever be a Patriot.”

A brick display, to be built at the entrance off Boundary, will bear a plaque in memory of Warren.

The new road onto the MA campus is just one of many recently-completed projects.

Some include new fencing throughout campus, water stations in the school buildings, shade structures for the elementary playgrounds, painting inside and out of the fieldhouse, taking the gym floor back to its original look with new logos, bathroom upgrades and a new cooking pavilion at the football field, improvements to the school’s drainage system and a new road to the softball and soccer fields.

Prior projects included technology/computer updates for students and new roofs on both the school building and gymnasium.

“We also want to thank the many others who have provided resources and assistance in making all of the recent projects a success,” Smith said.