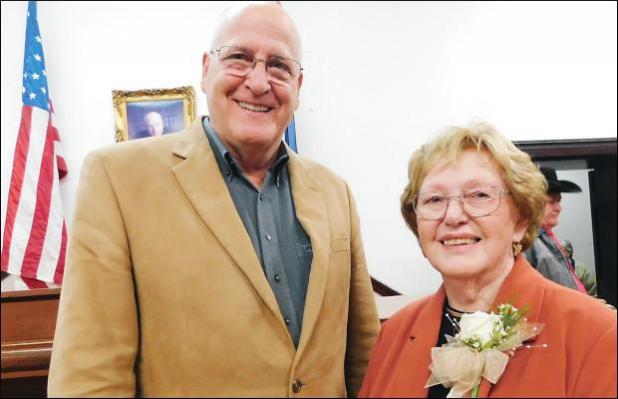 Photo by Sue Watson
Andrew Howorth, judge for the Third Judical District in Mississippi, congratulates his friend Lucy Carpenter on her retirement.

Lucy Carpenter – ‘a heart of gold’

No one could have said it better than election commissioner Marie Palmer when talking about longtime circuit clerk Lucy Carpenter.

“She has a heart of gold,” Palmer said.

“She helps anyone who comes into the office – helps solve all their problems.”

Carpenter is retiring December 31 after 44 years as an elected public servant in Marshall County. A retirement reception in her honor was held December 6.

Retired attorney Rook Moore, who has known Carpenter since she came in to the circuit clerk’s office, praised Carpenter.

“She ran an honest office,” Moore said. “She gave everybody respect.”

Judge Robert Elliott, who served one term at the bench in District 3 Circuit Court, said Carpenter was relied upon by judges.

“I thank her for taking an inexperienced judge and honoring him,” he said. “Judges also called on Lucy when they had questions.”

Long-time friend, Sheriff Kenny Dickerson, praised Carpenter and thanked her as well for her dedication and service to the county.

“The law books describe the laws that are required for a person to hold a particular office but don’t describe the dedication and duty required of a person,” the sheriff said.

Dickerson met Carpenter in the 1980s when he was a Mississippi Highway Patrol investigator. He produced evidence for grand juries. Later when he became sheriff, Dickerson and Carpenter worked closely on cases presented to grand juries and also with the court in prosecuting crime cases.

“Ms. Carpenter certainly was totally dedicated to the work required of her in the circuit clerk’s office,” he said. “Her work ethic went far beyond the hours of 8 to 5. She could be observed working late into the night fulfilling her duties as well as on many Saturdays. She did this because of her extensive dedication to the office of circuit clerk.

“Although the public may not think about it, when an experienced person leaves office, that institutional knowledge gained goes with them. There is much knowledge gained through experience that the average person may not realize.

“In short, Marshall County is a much better place in so many ways because of the dedication and long years of service of Lucy Carpenter.

“We became close allies as a result of over 40 years of close association in the offices we held. Lucy was a leader and hands-on clerk and her shoes will be hard to fill.”

The resolution describes a friendly person, knowledgeable about anything having to do with elections.

“She made me comfortable when I first came in,” he said. “She ran her office with the utmost respect – a true friend. A lovely person.”

Carpenter reviewed some of her life experiences and also thanked the people of Marshall County who served on juries.

“I’m so grateful for all of you being here,” she said.

Reflecting on the presence of senior judge Andrew Howorth, Carpenter quipped that she has the most seniority.

Carpenter said family, friends, teachers and other role models helped prepare her along the way, ever since grade school.

She put her entire self into her projects as a school girl. She won a 4-H competition by making a bug collection, prepared a presentation, and then went to all the clubs practicing for her big presentation at Mississippi State, where she won first place. For that Carpenter won a trip to Chicago, Ill, where she would compete with other 4-H’ers.

“I was feeling great,” she said. “I had won this contest. My head was getting bigger and bigger (on the way to Chicago).

“Ms. Hawkins called me aside and said, ‘I’m ashamed of you.’ I had been a perfect brat.”

Other teachers told her to not be so boastful and proud.

She entered the competition for queen of the Farm Bureau.

“Someone came in and said ‘Queen for a Day.’ I got an armful of roses and went to the Holly Theater where Leon Roundtree brought me up,” Carpenter said. “I was feeling really good about myself. Mother took me to the field the next day.

“You never get too old to be humbled.”

Carpenter said she had wonderful teachers and went to a good school. She knew she had to live up to the values taught her by her teachers and parents.

“People have put me here today,” she said. “I had 11 terms, and thousands of people who voted for me. I remembered enough (from childhood) to get to this office.