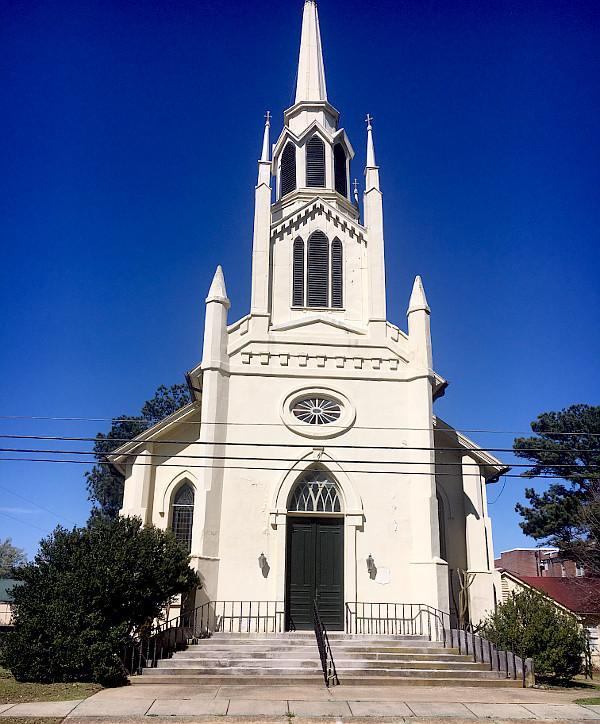 The 79th Pilgrimage will take place in historic Holly Springs this weekend, April 21-23.

Guests are invited to enjoy the historic homes, churches and museums on the tour. For the first time, the tour will include the Holly Springs Depot.  The Depot was built in stages (1850s, 1886, and 1940s) and served as a commercial and social hub for the region. The buildings survived the Civil War, including Van Dorn’s Raid on December 20, 1862. In the 1940s, after the Great Depression, O.B. Kerr rescued the Depot from being demolished and used ​it for his factory and family home. Currently the Depot is being renovated by Kerr descendants Gwendolynn Wyatt, her niece, Alexandra Ashmead, and her sister Josephine Wyatt-Ashmead.

After many years in retirement from the tour, Hilltop will once again open its doors to pilgrims. Built in 1856 on the site of the original Holly Springs settlement, Hilltop is a classic Mississippi planters cottage. The house was built by George Reynolds, the young son of a wealthy planter from North Carolina. It was purchased by the Fennel family in 1860, who owned it until 1940. A lightning strike in 1960 heavily damaged the second floor, and a major renovation in 2002 replaced the rear of the house. The main rooms, still intact, feature classic Greek Revival detailing, with 14-foot ceilings and 10-foot, six-inch doors. The home is currently owned by Dave and Pamela Zelman.

One of the oldest surviving buildings in Holly Springs, Cuffawa, will also return to the tour. Built by Charles Niles in 1832 when Holly Springs was still a trading post, Cuffawa, meaning “place of abundance,” was named by later owner Joseph Dean after his family plantation located along the Cuffawa Creek. The original four-room log cabin is still encased within the walls of the cottage, including the main roof beam which retains its bark and spans the entire width of the house. Cuffawa features a wide, comfortable gallery with transomed entrance, heart pine floors, and federal style millwork. Period antiques, many of them family pieces, complete the home that has maintained a family lineage since the early 1870s. It is the home of Diane Greer.

Another long-anticipated return to the tour is Crump Place, built in 1837 by Sam McCorkle, one of Holly Springs’s founders. During the Civil War, the home was used as an officers’ quarters. It garners its most fame as being the boyhood home of Edward H. “Boss” Crump, legendary mayor of Memphis. Crump Place is a single story, flanking gable of heavy timber frame construction. Wings to the east and west were added. The front view features a five-bay inset gallery with prominated entrance portico. It has been restored to its original colors and is the home of Dawn and Martin Donnelly.

The tour also features Montrose (1858), headquarters of the Holly Springs Garden Club, sponsors of the pilgrimage, which houses an arboretum featuring trees and plants native to Mississippi.

The weekend will start with the ribbon cutting ceremony on Friday, April 21, at 9:45 a.m. This year’s queen, Taylor Virginia Blaker, will be escorted by James “Wil” Wilson Summerlin Jr. Taylor is the daughter of Greg and Jennifer Barkley and the late Gerry Blaker and is a junior at Marshall Academy. Wil is a senior at Marshall Academy and is the son of Tish and Jim Summerlin. Pilgrims will see the young ambassadors throughout town at the homes and events and in a horse-drawn carriage during the weekend.

According to the Holly Springs Garden Club president, Dr. Sherry Childers, the tour this year will once again revive Union and Confederate generals for the mix-and-mingle event “Juleps with Generals.”

“Last year, we had an extraordinary turnout for this event.  It was so much fun that we just had to do it again this year.”

History lovers are invited to this “civil” gathering of generals at antebellum mansion Montrose, where they will enjoy a chance to mingle with generals from both sides of the Civil War, while enjoying Southern hors d’oeuvres. All generals are professional re-enactors who embody the character of the generals they portray. Space will be limited for this living history event so guests are encouraged to visit the website soon for reservations.

The popular guided cemetery tour, A Walk Through Time, will continue this year on April 22 at 10 a.m. Tours begin every 20 minutes at the northwest gate of Hill Crest Cemetery with the last tour starting at 11:30 a.m. No tours will depart in the event of rain.

Museums open for the weekend include the Ida B. Wells Barnett Museum, the Church of the Yellow Fever Martyrs and the Marshall County Historical Museum.  Each of these museums is located in a historic building, as well.

On Friday and Saturday, guests may make plans to enjoy the Plant it Pink luncheon to benefit the fight against breast cancer at the Kate Freeman Clark Art Gallery.

The Holly Springs Pilot Club will sponsor artists and craftsmen displaying their work on the grounds of the historic Marshall County Courthouse on Friday and Saturday.

Guests are invited to join the free “Tent Talks,” educational performances, presentations, and demonstrations by authors, musicians, artists, and historians throughout the weekend. All events are free and will be held, unless otherwise noted, on the grounds of Montrose. A full schedule of events and times will be listed on printed guides at the Pilgrimage headquarters.

Saturday evening, the Holly Springs Garden Club will host Montrose Under the Moonlight, featuring dinner and dancing beneath the magnolias at one of the town’s finest antebellum homes with music by The Dantones.

Sunday’s guests are invited to a Southern brunch on the grounds of Montrose with a tour of the home. Reservations are encouraged.

For tickets to this year’s festivities, visitors should call 662-551-0076 or visit www.hollyspringspilgrimage.com. The day of the pilgrimage, tickets may be purchased at the Marshall County Library.

The Pilgrimage is sponsored by the Holly Springs Garden Club.