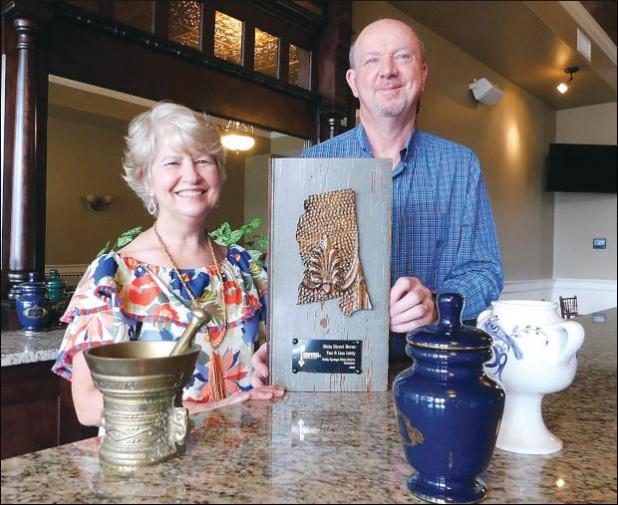 Photo by Sue Watson
Tim and Lisa Liddy are pictured at The Apothecary with a state award presented for their commitment to downtown.

Tim and Lisa Liddy, owners of Court Square Inn and The Apothecary, in downtown Holly Springs, were honored by the Mississippi Main Street Association as Main Street Heroes.

The Liddys have shown leadership in the private sector and in the public sector.

This award recognizes outstanding community leaders or public figures who have displayed an involved commitment to downtown and his or her Main Street program. “It’s quite an honor,” said Lisa Liddy,

who is responsible for upkeep of Court Square Inn, a bed and breakfast and the downstairs business, The Apothecary, which is available for banquets, meetings and receptions.

These two businesses were opened after restoration of the old Seale Drug Store building on East College Avenue.

Tim Liddy owned his own pharmacy in Holly Springs for years before selling his business to CVS three years ago. He continues to work there as the pharmacy manager. Tim Liddy has been elected four

Lisa Liddy has been heavily involved in the Marshall County Relay for Life since the event started.

The Liddys also purchased a historic home in June 1992 — Rutledge, listed on the National Register.

Tim Liddy served on the City Beautiful Commission under the late mayor Eddie Lee Smith. And he served on the Historic Preservation Commission for 10 years. He has also served on the board of directors of the Chamber of Commerce, now Main Street Chamber, on and off for a number of years.

He, along with David Beckley and Clencie Cotton at Rust College, is credited with helping bring the Main Street Program to Holly Springs.

“It’s kind of like walking the walk and talking the talk,” said Owens, meaning the Liddys have put their money where their mouth is in terms of community service and community building and development.

By restoring the old Seale Drug Store building, they saved the structure and put it back to use after being empty for years.

“Tim and Lisa Liddy have spent their lives giving back to Holly Springs,” said Owens in her nominating form. “Tim has been a pharmacist in Holly Springs since 1989, and Lisa was the deputy city clerk for Holly Springs until 2003. Tim has also served many years as an elected official.

“Tim and Lisa purchased a building located on the Historic Courthouse Square and began renovating the second floor in 2007 to include three luxury suites called the Court Square Inn Bed & Breakfast. In 2017, Tim and Lisa began renovating the first floor that had previously been the home of three different drug stores, and The Apothecary event space officially opened in 2018.

“Tim and Lisa are preservationists at heart and great partners of Main Street, and there is not a more deserving couple than the Liddys to be called Main Street Heroes.”

MMSA staff presented the 2020 awards from the Old Capitol Inn in downtown Jackson via Facebook Live.

The annual awards honors Main Street directors, board members and volunteers and recognizes the most outstanding downtown development projects from Main Street communities in Mississippi.

“Mississippi Main Street is excited to celebrate the achievements of our Main Street communities,” said Steven Dick, MMSA Board President. “Our local leaders have worked tirelessly to provide economic opportunities, increase quality of life, and preserve what makes our downtowns special.”