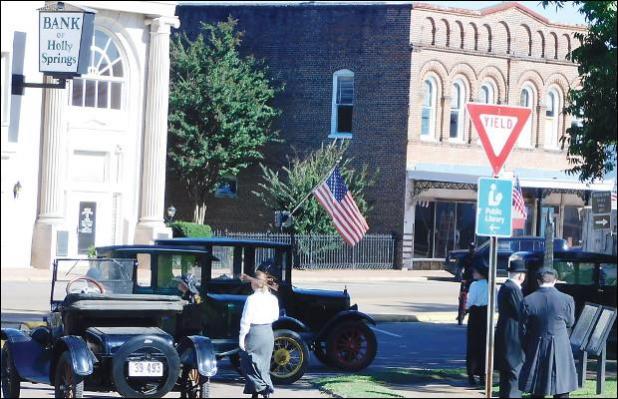 Photo by Sue Watson
Scenes for “The Past Is Never Dead” take shape in downtown Holly Springs Thursday of last week.

The City of Holly Springs pulled out all the stops Thursday to do everything possible to assist Yoknapatawpha Films shoot scenes for the historical docudrama “The Past Is Never Dead.”

The crew chose Holly Springs to film some sets in front of the courthouse and around the square at Booker Hardware and the post office.

Holly Springs, Oxford and Water Valley were the three locations chosen. Holly Springs was chosen because the Oxford Square has lost some of its mystique because of modernization, according to John Faulkner, chief of staff for the city.

One set decorator said the film company picked Holly Springs because the producer liked the gazebos.

“It’s a great thing for the city when filming crews decide to shoot scenes in Holly Springs,” he said. “We are no stranger to films being shot here in the city. Our staff has worked to be as helpful as possible.

“The film focuses on a great American author, William Faulkner, who is also a native Mississippian. We are proud of that connection and thank the filming crew for choosing Holly Springs.”

Buck also thanked city employees who helped with traffic control and the citizens for their enthusiasm and cooperation.

“I think it is absolutely amazing for this production company to choose this location,” he said. “It is fitting for them to do the film here in Holly Springs. It’s a good look for our city.

“I know we’ve had some movies filmed here in the past. It’s a good company. The production team is a nice group of men and women.

“The city staff has been amazing -– the police, street, buildings and grounds and fire departments – to accommodate the production team.”

John Faulkner said the producers met with the mayor.

“They gave big kudos for our city staff,” he said.

“One producer said they’ve filmed in many places and this is the best site they’ve filmed. They liked the good Southern hospitality.”

Local businesses on the square were also cooperative and kind to accept the inconveniences of traffic barricades, John Faulkner said.

“We thank them for that.”

The film crew used the Eddie Lee Smith Multi-Purpose Building as a staging area for the set. Hair and makeup and other preparations took place there.

The citizens were also thanked for their cooperation in being detoured around the downtown square.

Sandy Buford, with the mayor’s office, expressed joy at meeting the filming crew in city hall.

“They were down-to-earth people – really polite,” she said.

John Faulkner talked to Charles Richie, of Tupelo, who brought his 1923 car. Richie said the car he drove in the movie would have cost $300 new and a top-of-the-line car of the era would have cost $600. It would take three years for a buyer to pay off the note, he said.

Marie Bongiovanni, at The Bottomless Cup, was all aglow.

“I loved the people,” she said. “They are so nice and interesting.”

Michael Modak-Truran, the writer for “The Past Is Never Dead,” spent over 30 months researching William Faulkner and interviewing scholars across the globe, stating he believes Faulkner and his work are still relevant.

“In a world rife with political and social turmoil, it is rare to find an author, like William Faulkner, whose words still resonate today,” Modak-Truran said.

Yoknapatawpha Productions is an American entertainment company specializing in documentary films, founded in 2016 by Anita Modak-Truran and Lee Caplin.