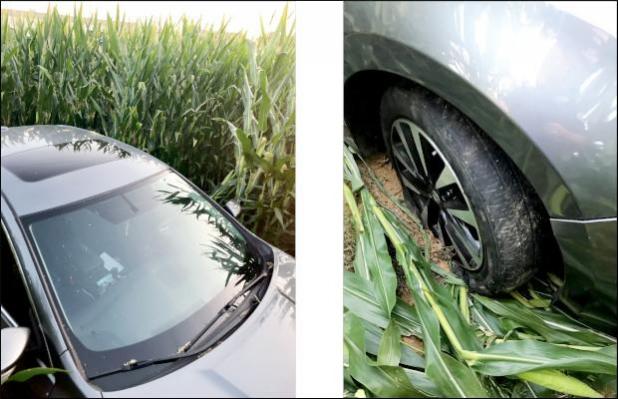 Photo courtesy of Marshall County Sheriff’s Department
The suspects’ car came to a stop in a cornfield after deployed spike strips blew out a tire.

Two suspects in an armed robbery in Corinth July 14 were arrested after Marshall County deputies threw out stop sticks near the Tennessee state line, according to Sheriff Kenny Dickerson.

He said the suspects, who allegedly robbed Culver’s Grocery, were pursued from Alcorn County west on Highway 72, through Tippah, Benton and Marshall counties. Dickerson’s deputies utilized the stop sticks near the Cayce Road intersection with Highway 72.

The sticks blew out one of the tires on the vehicle, he said, but the driver continued on into Tennessee and ended up in a field.

Alcorn County Sheriff Ben Caldwell said two suspects went inside a convenience store in Corinth while a third suspect remained outside as a lookout.

One of his deputies had just pulled up to the store and saw suspicious activity by an individual outside the business, who appeared to be a lookout, he said.

“Basically, we disrupted the robbery as we pulled up,” Caldwell said.

Two suspects left the store in a vehicle, while Corinth police officers arrested a third suspect in the general area of the store, he said.

Three deputies in vehicles pursued the getaway vehicle to the Alcorn County line where two deputies continued the pursuit all along Highway 72 to Piperton, Tenn., Caldwell said.

Marshall County intercepted the fleeing vehicle by throwing out stop strips. The driver continued on about onefourth mile before pulling off the road and driving about 10 to 15 feet into a corn field, where he and a passenger jumped out and fled on foot, according to Maj. Kelly McMillen.

A K-9 unit from Somerville, Tenn., caught one suspect, David Cardell Brown, around 7:30 p.m. In the corn field, Dickerson said. Brown had several thousand dollars on his person, he said.

Charles Cordell Williams was captured at a woodline near the corn field around 11:30 p.m., according to McMillen. The 31-year-old from Indianola was the driver of the vehicle, and he is charged with felony fleeing by the Alcorn County Sheriff’s Department, Caldwell said.

Brown, 30, of Greenville, has not been charged by Alcorn County, Caldwell said.

Both of those suspects were back in the City of Corinth Friday, he said.

The Corinth Police Department charged Andrew Terrell Walker, 28, who gave an Allen Street address in Corinth, with armed robbery, according to an article written by the Daily Corinthian’s Jebb Johnston. He was the suspect arrested a few blocks from the store after the incident. Walker’s identification card listed Indianola as an address.

The other two suspects, Brown and Williams, were also charged with armed robbery by the Corinth Police Department.

Brown and Williams were out on bond in a capital murder case out of Washington County, according to the Daily Corinthian.

Deputy Mackie Sexton with Alcorn County is credited as the officer who saw the robbery in progress at the store.

A Tennessee Highway Patrol helicopter, from Chattanooga, conducted surveillance of the area with a infrared (heat sensing) detector and located Williams along a woodline near the corn field, Dickerson said.

The two suspects arrested in the chase were taken to Somerville (Fayette County) where they were charged with evading pursuit, he said.

Corinth police captain Dell Green reported one firearm was recovered at the scene and a second one in the getaway vehicle, according to the Daily Corinthian.

One suspect held a gun on the store clerk during the robbery, according to authorities. The men left the store with a money bag which was thrown out of the vehicle and recovered at Martin’s Crossing. The bag was empty but the money was likely recovered from Brown during the arrest, according to Dickerson.