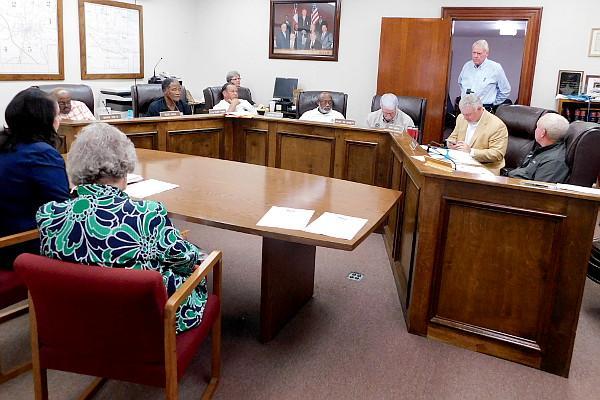 An intruder recently at one of the schools raised the need for more security on campuses.

Hale said the intruder came off the highway. He was escorted out.

“But, sometimes doors don’t always stay locked,” she said, to explain how an intruder may sometimes gain entry into a school building.

One week prior to school reopening in August, law enforcement and the FBI set up a command center at H.W. Byers school while they searched houses on Highway 72 for a shooting suspect.

Another incident involved an unidentified person entering Potts Camp School for a brief period during the second week of school before being escorted out of the building by administrators.

Hale said the intruder was apprehended by the sheriff’s department.

“Those incidents are a wake-up call,” Hale said. “You never know what some people will do. Although we don’t always have control over unpredictable situations, we know we must take safety precautions and be prepared.

“Even though each school has a Crisis Management Plan, you can never be too cautious.”

Hale said the actual number of such incidents a year is not known, but when more serious occurrences do happen, the district calls law enforcement.

“They have always been supportive,” she said.

The base pay for an SRO is the same as teacher pay. With retirement and benefits the bill would run $46,225 per annum, per officer, she said.

The grant would require a $10,000 match by the school district and Hale asked the county to put the same up as a match for the grant.

Supervisor Keith Taylor expressed his concern that the security be beefed up right now, and not wait for a grant to take action.

“I know we have the budget coming up and money’s tight,” he said. “It’s a cruel world we live in now. I would like to know the kids are safe. There are some sick people out there. I would hate to know a little money would have made a difference.”

The county would run the SRO program and the sheriff would train officers in addition to their training and certification by the Mississippi Department of Education.

Marshall County Sheriff’s Department and the Byhalia Police Department serve as security for sporting events, Hale said. The ambulance service is on call, as well. And some officers serve as both security and EMTs at games.

“I think we need to address the schools first before we get too far into budgets (budget planning),” Taylor said. “Ball game coverage is extra. I would like to come up to jointly support (school bus) escorts to the games.”

Supervisor George Zinn III said a few years ago the county had grants to pay the salaries of SROs at the schools.

The fourth year the sheriff’s department had to pay the salaries of officers who had been paid the first three years off of COPs grant monies.

Deputy Cathy Brittenum said the county has not received federal COPs grant monies for several years. The grants are competitive, she said.

Sheriff Kenny Dickerson said the safety of the children and teachers is of utmost importance.

“I totally support SROs,” he said.

He said certified officers who have a good head are needed, “because we do not want an officer to create something worse than the situation he encounters. I totally support it 100 percent.”

SROs would be carefully selected, he said.

“What the school needs is somebody there full-time. We need them more now than ever before,” the sheriff said.

Brittenum said SROs are trained by Education, but some school districts have their own in-school-district police department.

“The SRO program was a good program, a very vital program,” she said.

“A police department in the district?” Zinn asked.

“It is operated within the school district,” Brittenum said.

“It would be similar to the campus police at Rust College,” Thomas said.

“What happens in the meantime as far as security for campuses?” asked supervisor Charles Terry.

“We can have part-time,” said Dickerson. “No one can be dedicated full-time now because we have courtroom security, etc.”

“If we don’t have it in our budget?” Taylor asked.

Hale asked for either SROs or safety officers, whatever the budget will allow.

Brittenum said certified SROs must take 40 hours of training within the first year in order to earn certification with the Mississippi Department of Education.

“We will know in October if we get the grant which would take effect Dec. 1,” said county administrator Larry Hall.

The board followed with a unanimous vote to support the partnership with the school district to apply for four SRO positions.

“I want the sheriff, Susie (Hill) and Hale to see what it would take to fully staff them now,” Taylor said. “Even if we don’t get the grant, I think we still need to have it.”

“If we don’t get the grant, I will go back to the drawing board with supervisors and the school board,” Hale said. “The safety of our students comes first.