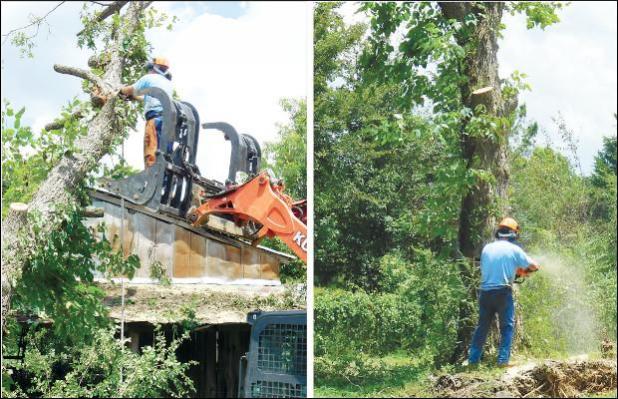 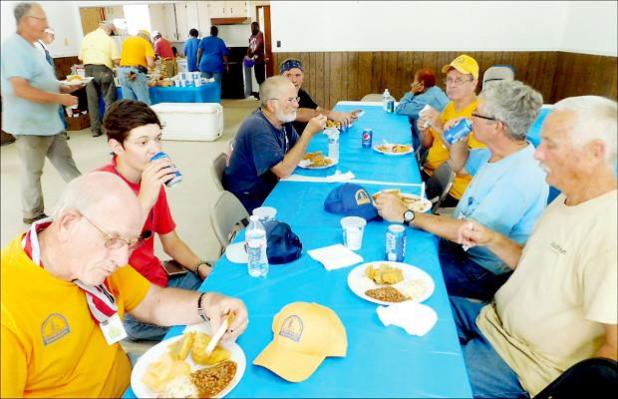 Volunteers, with wet and grimy T-shirts, cool off and eat a good lunch before going back out for the afternoon.

An EF-0 tornado, one that did not touch the ground and covered about seven miles in the west and central Marshall County area Tuesday, July 16, didn’t damage much property but left a lot of cleanup work.

The volunteer fire departments got out after the storm to cover roofs with blue tarps to protect homes from more damage from rain.

“At North Carolina our kitchen cooked right at 20,000 meals a day,” he said. “This is the first time I’ve been this close to home. It’s just big mission work, that’s all it is.”

Volunteers worked two days at Bryan Evant’s place on Friendship Road. There were close to a dozen trees downed in the yard and one large tree fell on the roof of his barn.

“No way I can thank them enough,” he said.

John Hampton, of DeSoto County, said there was about $10,000 in equipment on hand to work the trees away from Evant’s house, which lost only a few shingles.

The Baptist Association owns lots of the equipment, but volunteers bring lots of their own equipment.

Funds are raised for the relief through the Margaret Lackey Christmas Fund and through private donations, Hampton said.

“We’re all volunteers doing this,” he said. “I’ve known David Cook and Hugh Hollowell and everybody at the sheriff’s department for years.”

Hampton is a retiree from the ambulance services. He also worked with DeSoto County K-9 and has served as a law officer.