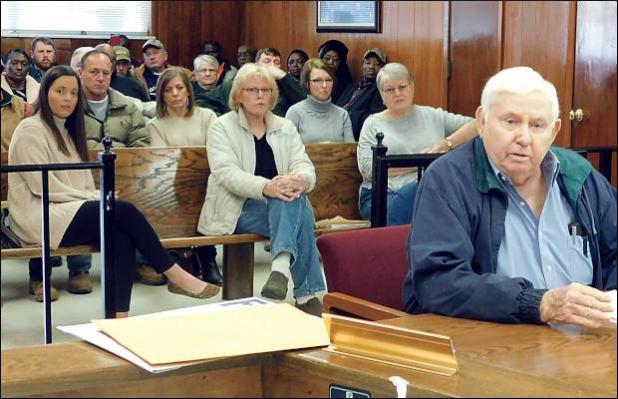 Photo by Sue Watson
John Paul Carpenter addresses the county board of supervisors while citizens in opposition of the city's annexation of Area 3 are seated behind him in the board room.

Some residents who would have their property annexed by the City of Holly Springs recently appealed to the Marshall County Board of Super - visors for support against the plan.

The increase in taxes on their property if the city takes in their land was the main objection.

John Paul Carpenter, who lives on Higdon Road, represented a number of those who reside in Area 3. He thanked the board of supervisors and then provided talking points to stay on topic.

“We oppose the Holly Springs annexation of our homes and property,” he said. “We believe the county is a great place to live – low taxes, good services, good roads and good neighbors.”

• most all residents in Area 3 who would be annexed already have city services including gas, water, electricity, fire and sheriff protection. “It seems like this annexation is only for more roof tops to raise money,” Carpenter said.

• most of those who would be included in the annexation did not know the plan was pending and was being voted on by the board of aldermen.

“Notification and communication were not very good. Awful, in fact,” he said.

• the mayor and Carpenter both wrote letters to the editor in The South Reporter after the annexation was approved by the board of aldermen. Carpenter said the public asked for a meeting with the city but the city did not respond. “We went to work to do what we could to make our voices heard,” Carpenter said. “We went door to door. All of the people were against it except one who wanted to check the facts.”

• signed petitions opposing the annexation, copies of Carpenter’s sanitation bills from Team Waste and the Holly Springs Utility Department showed solid household waste would be increased by $10.85 per month if annexed.

• the increase in taxes and cost of services would create hardships on many of those living in the Area 3 annexation plan. Many of them are senior citizens on fixed incomes, he said. Some said they would sell out or move out of Marshall County, if the annexation is approved.

• much of the land in the Area 3 annexation plan is not usable for economic development. No houses have been built except for Carpenter’s house and ones that have been replaced after the tornado of Dec. 23, 2015. “These people chose to live in the county, not in the city,” he said. “We love the county and Holly Springs. Please do not let this happen. Now we humbly ask for your support with a resolution showing you are with us in our opposition.” “We are church-going people and don’t ask for anything,” Carpenter continued. “Common sense tells you we are in the best place. We have got you all, our voices. Is this unfair? Is it a burden on us? Should we move further out or to Lafayette or Benton county? We don’t want this to happen. This is our home.” District 5 supervisor Ronnie Joe Bennett expressed his displeasure with the Area 3 annexation plan. Many of his constituents are living in that annexed area.

“We’ve been against it from the get-go,” he said. “The city doesn’t have to put anything out. People don’t realize that if you have a $100,000 home, you pay over $300 more in taxes in this plan. And talk about what you are going to get. You already have that. And you have better roads.

“They are picking to get most of the existing homes. I can’t see it. It is going to be left up to the chancery judge. If there is no one over there (at court) complaining, it’s gong to go through. You need to be united – let the chancery judge know how you feel about it. They are not bettering you. They are taking away from you.

“The board of supervisors have no vote on it. All we can say is we don’t want it.”

District 3 supervisor Keith Taylor offered support to the group, saying he never once voted for annexation in Byhalia.

“This board has been behind me,” he said. “There are areas in mine (area) that have not been brought up to standards. The citizens may have to get an attorney to go before the judge.”

“You need an attorney at chancery court,” said board attorney Kent Smith. “They have to file a proceeding for annexation. The way to defeat it is to show they are just trying to get a tax base, not to provide services.”

Smith said when entities want to take an area they “make a lollypop” to capture something in a circle that is of high value for annexation. The concept is something like meandering that takes place sometimes in forming district boundaries.

“Get a lawyer to show the lollypop extensions. That’s how you attack it to win it,” he said.

“I’m with you 100 percent,” he said, “but not against total annexation. I have heard no opposition in my district.”

Judy Smith asked to be heard. She said she wants to know where the extra tax money coming in from this annexed area would go within the city. A retired educator, Smith wondered if the extra tax revenue would help the city school district.

“The city would have to budget that into the school system,” Taylor said. “It is up to the city.”

Supervisors thanked the boardroom full of citizens for coming before the body.

“Together maybe we can stop this thing,” Carpenter said. “We’ve got a chance, anyway.”

With discussion concluded, the board of supervisors unanimously passed a resolution in support of the citizens group that is against annexation of Area 3.