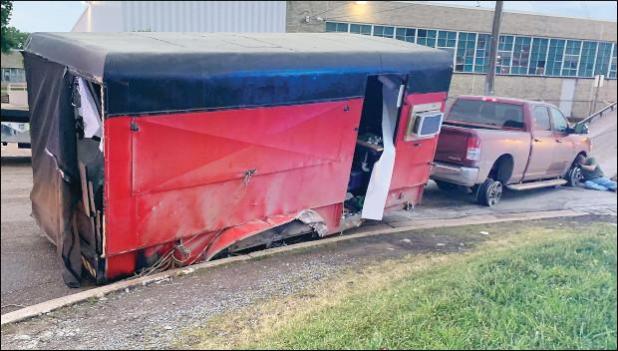 Photo courtesy of Tracy Jeffries
The trailer was heavily damaged as the chase traveled into neighboring Tennessee, where an arrest was made in the case.

A food trailer operated at the corner of Van Dorn Avenue and Craft Street was stolen early Wednesday, May 13, between 3:30 and 4 a.m., according to owner Tracy Jeffries.

The trailer was recovered in Memphis, Tenn., by law enforcement but it was extensively damaged during a fast chase from Holly Springs to Memphis, he said.

Jeffries said he and his son, Travion, owned the unit to generate income for his two children in college.

A friend of the family was driving through the area just off the square in Holly Springs and thought he saw something suspicious, Jeffries said. His friend called police and also called Jeffries. The Holly Springs Police Department initiated the chase of a truck pulling the stolen trailer on Craft Street, and it continued westward on I-22 as the driver attempted to outrun law enforcement, he said.

Jeffries said he also joined the chase behind law enforcement.

Olive Branch authorities threw out stop sticks in the highway and the driver "drove for miles and miles" on flat tires," Jeffries said.

The heavily-damaged unit is now at the Marshall County Sheriff's Department, Jeffries said. He said he plans to replace it and be back in business soon.

He is grateful to law enforcement officers for the work they did to apprehend the driver.

"I really want to thank the Holly Springs Police Department that it got solved and that no one was hurt," he said.

Jeffries and his son Travion are both part-time firefighters with the Holly Springs Fire Department.

The suspect in the case, Nichalous R. Jones, 22, of the 5300 block of Hudgins Road, Memphis, is charged by Holly Springs police with assault, disorderly conduct, escape and larceny, according to the police report.

Officer Tareq Elkhayyat reported he was patrolling in the area when he was flagged down by an eyewitness who reported the truck had been taken just seconds before he arrived in the area. He pursued the vehicle down Craft Street and later spotted a Dodge Ram 2500 pulling the food truck.

The driver refused a signal to pull over and was blocked off at Crescent Meadow Drive by traffic at the light, according to the police report.

The officer pulled alongside the front side section of the Dodge Ram and was struck on the arm by the driver-side mirror. Backup arrived at the scene to assist and the suspect continued southbound and entered the westbound ramp of I-22.

Elkhayyat said the driver continued at a high rate of speed and attempted to strike his patrol car several times.

Memphis police took Jones into custody on charges of evading arrest and reckless driving, according to the HSPD report.

Jeffries announced that a fund-raiser to rebuild Smokey Corner will be held this Saturday, May 23, from 10 a.m. to 2 p.m. Barbecue plates are selling for $10, plus other menu items will be available. Call 662707-0180 to place an order or for more information.