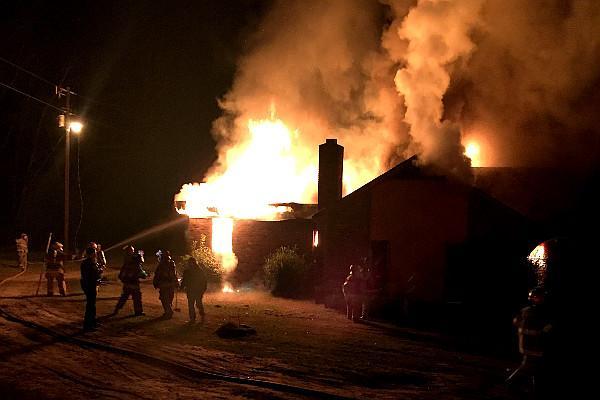 About 40 firefighters from six departments battled a house fire in the 1800 block of Cayce Road Thursday night, Feb. 9.

Richard Patterson, chief of the Victoria Fire Depart­ment, said the home was a total loss.

He lives nearby and was one of the first firefighters on the scene about 7:30 p.m. after being dispatched by 911.

“Fire was coming through the roof on the left side of the house,” Patterson said. “It was fully involved.”

“We tried to get inside but couldn’t,” Patterson said. “The roof was falling.”

He said it was the home of Annie Moffitt, owner of Annie’s Restaurant in Holly Springs. He said no one was at home when the fire erupted.

“We dumped a lot of water on it,” Patterson said. “We appreciate everybody’s help.”

He said firemen left the scene at about 10:30 p.m. Thursday. The cause of the fire was still unknown at press-time.

Moffitt thanked everyone for their help and support.

“I want to thank everybody for their prayers,” she said. “There were so many folks there that night helping. I’m so thankful, and I am blessed.”