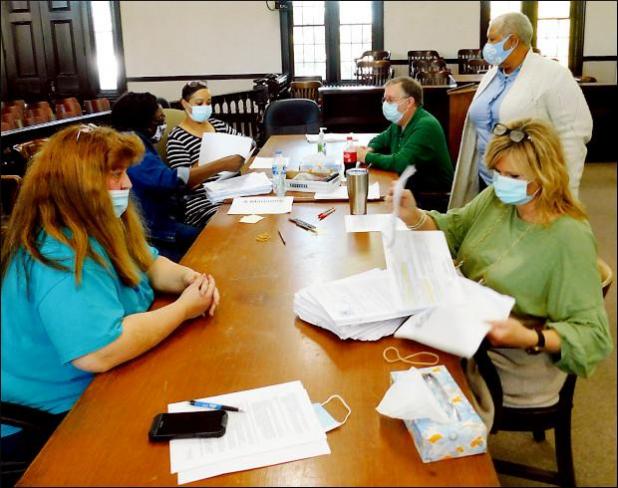 Photos by Sue Watson
Paper mail-in and absentee ballots were checked by the resolution board before being counted by a scanner. From left, around the table, are Angela Spindle, Coretta Craine, Wanda Scott, Kendall Pierce, Monet Autry (standing) and Susie Murphy. 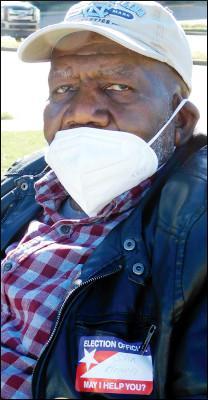 John Brown served as poll manager for the voting precinct at the Holly Springs Fire Department.

Marshall County experienced a strong voter turnout in the November 3 election — one of the best ever.

“Everything went as planned,” said circuit clerk Monet Autry, in her first term and overseeing her first election. “We did have long lines at the opening of the polls, however, people were patient because they wanted to vote.”

All results are unofficial. Absentee ballots could still be received through November 9. No ID affidavit voters may produce their ID up until November 10, Autry said, and those ballots will be counted/scanned on November 12.

There were three contested races for election commissioner on the ballot.

In District 4, election commissioner Naomi Thomas Taylor was re-elected in a close vote. She received 1,390 to challenger Jacqueline Simon’s 1,237, a difference of 153 votes.

National news outlets reported Saturday that Biden/Harris had been elected.

Statewide, Hyde-Smith was re-elected to the Senate seat.

Republican Trent Kelly was re-elected to the U.S. House of Representatives. In Marshall County, he had 7,579 votes to 6,922 for Democrat Antonia Eliason.

Josiah Dennis Coleman was re-elected to his seat (District 3, Position 3) on the Mississippi Supreme Court. In Marshall County he received 7,558 votes to Percy L. Lynchard’s 4,342.

House Concurrent Resolution No. 47. It requires in Mississippi, to be elected to a statewide office, a candidate must receive the majority of the votes in the General Election. The requirement of receiving the most votes in a majority of state House of Representatives districts is removed.

Plus, Marshall Countians and Mississippians overwhelmingly approved a new state flag featuring the words “In God We Trust.”

Autry commended others for their contributions to the overall smooth election process in Marshall County.

“I am really pleased with our poll managers we had in place on Election Day,” she said. “Because of COVID-19, we had to replace poll managers at the last minute ­ and nothing but positive feedback so far.

“And sometimes we overlook the very people who matter the most, and I wanted to let Marshall County citizens know how much I appreciate my deputy clerks for their hard work and dedication to Marshall County. They are essential workers and deserve all the credit for the absentee process.

“Also, the election commissioners were there every step, pushing us as well, and ensuring the machines worked properly and the poll managers were in place on Election Day with all essential information necessary to run an efficient election.”

In the runoff race for Marshall County School Board, District 5, absentee ballots will be available as soon as possible. Contact the circuit clerk’s office at 252-3434 for more information. Polls in that district will be open from 7 a.m. To 7 p.m. Tuesday, Nov. 24.