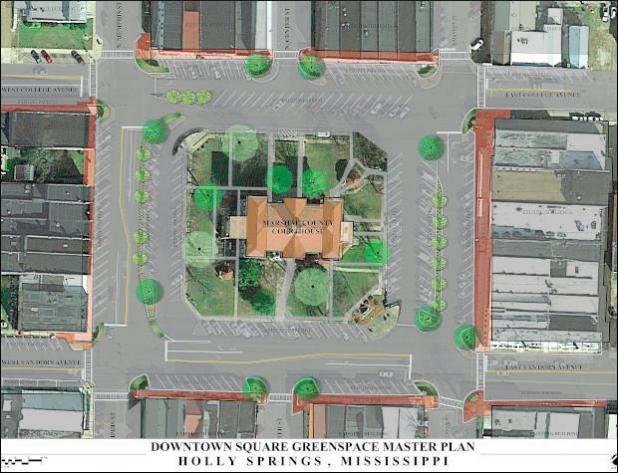 Owens, who also serves as Ward 4 alderman in the city, was accompanied by public works director Will Denton.

Progressive Construction won the bid for the work. Progressive also has the contract for replacing the courthouse roof.

The demolition of five parallel parking spaces on the east side of the courthouse will make space for more greenery. Sidewalk improvements and installation of landscaping beds on the corners of the square will also be done.

Owens praised the county’s upgrade of the courthouse, which will add to what the city is doing to improve the overall appearance and walkability of downtown.

“It may interfere with parking in the construction part,” Owens said. “It’s important to let you all know.”

The plan is to plant two holly trees, crepe myrtles, and elm trees – a total of 21 trees in all, placed mostly on the corners and in the peninsulas at the ends of each block.

Ronnie Joe Bennett, District 5 supervisor, advised the elm would create roots that would buck up the blacktop.

Chancery clerk Chuck Thomas, reluctant to be happy with losing parking spaces around the courthouse, said there is a need for 50 more parking slots as it is. He wondered if the green space behind Booker Hardware, owned by the county, could be converted into parking.

“That would be something we could work on with the county,” Denton said.

Comptroller Susie Hill pointed out that the city has a parking lot beside Thomas Gas on West Van Dorn Avenue.

County administrator Larry Hall asked Denton who is going to sweep up the leaves when the trees shed in the streets.

Owens said the mayor is considering hiring someone to pick up the leaves with the vacuum truck.

“Hauling is the problem,” she said.

Bennett noted this is a bad time of year to start digging up the asphalt.

Denton said it is also a good time to do it since Progressive is already here working on the courthouse.

Plans are to begin at the corner of Van Dorn Avenue and Memphis Street, he said. Work would go clockwise from there around the square.

“Removing the interior islands will tie up parking spots,” he said.

The sidewalk from The Bottomless Cup to city hall will also be taken up and replaced with brick similar to the sidewalk crossings at the intersections.

Owens said the planning for beautification of downtown has been underway for two years in the design and implementation phase.

This year the city installed beautiful lanterns on the awnings around the square which make the city alive and bright after sunset.

Others are investing in building improvements, including the Rodeo Cafe, which is in the works at Memphis Street and West College Avenue, and the repaired and renovated Callicutt and Hutchens buildings on the south side of the square.

The city also cleaned and painted the awnings and all wrought iron in the downtown area.