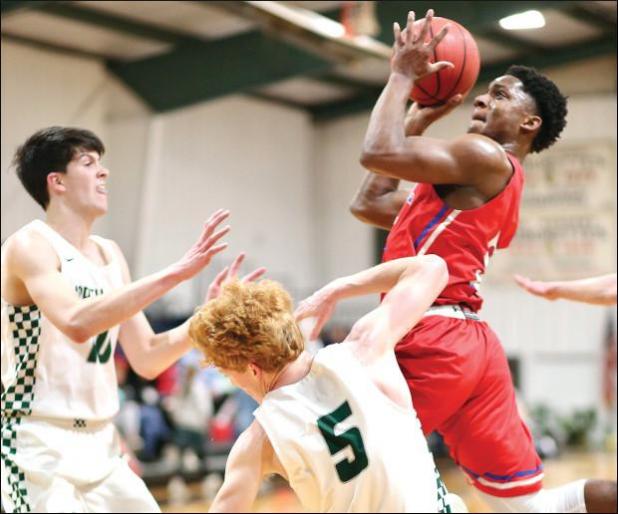 Photo by Theresa Bolden Devore
Philip Parks collides with a North Delta player as he takes the ball to goal in the semi-finals.

For Marshall Academy, it was a picture-perfect game on championship Saturday.

The Patriots, in the District 1-3A title game at Kirk Academy, turned up the heat from the get-go and stampeded the Lee Colts 70-33 for the big, blue trophy. It was the second straight district crown for MA, with last year’s coming in Class 2A.

“Our pressure defense provided a huge spark,” coach Jeremy Ervin said. “We are at our very best when we can get out in transition. For that to happen, you have to forces misses or turnovers. We got our fair share of both and made it a track meet out there.”

The Patriots’ full-court defense paid dividends quickly as they erupted for a 24-9 lead after the first quarter.

They doubled their point total in the second and took a commanding 48-22 halftime advantage.

At the end of the third, MA was up by 35 points, which meant a non-stop clock in the fourth.

Four Patriots scored in double digits – Philip Parks with 18, Sam Greer with 15, Jeremiah Jones with 14 and Anthony Mayfield with 10. All four are seniors.

“The next noteworthy thing (other than pressure defense) was the balance on the offensive end,” Ervin said. “We did a great job of sharing the ball, finding the open man, making that one extra pass and finishing around the rim. I believe the perception out there may be that we’re a oneman team, but nothing could be further from the truth.

“I hate to use the word perfect, but in this win, our execution of the offensive and defensive game plan was as close to perfect as I’ve ever seen.

“I’m extremely proud of these boys. We took some lumps early in the year with the toughest schedule I’ve ever had but it was preparation for this. These guys never put their heads down, continued to trust in what we were doing all year, and now they’re reaping the benefits of their seasonlong labor.”

A last-second, desperation three by the Green Wave then missed the mark. The Pats went up 14-12 in the first quarter but couldn’t retain the lead in the second. The Green Wave carried a 30- 26 advantage to the locker room at intermission.

Jones scored 11 of his game-high 21 points in the first half, including three threes. North Delta was up six with 3:05 to go in the third but the Patriots found some momentum and took a 40-38 lead to the fourth.

Points were hard to come by for both teams down the stretch, with Parks’ clutch free throws sending the Patriots to the title contest.

The Marshall boys (19-9) open North State play on Thursday of this week at Central Holmes versus Indianola Academy.

The MA girls put a major scare into the host school, Kirk, in the district consolation contest Saturday, before losing 53-42.

The Lady Patriots, led by six first-quarter points from Evelyn Greer, went up 15-14 after the opening period.

Kylie Gurley provided a couple of key second-quarter buckets as MA kept the pace, leading 24-23 at the half.

MA maintained a lead until the last minute of the third. That’s when the Lady Raiders turned the tide, going up 40-35 entering the last quarter.

Marshall couldn’t recover and fell by 11.

Greer and Gurley scored 13 each for the Lady Pats.

In the semi-finals on Thursday, the MA girls turned in a solid effort against the district’s top team before falling 54-38.

The Lady Patriots stunned the Lady Green Wave early, taking a 12-11 lead in the opening period.

However, North Delta was able to make a run late in the first half and went to the break with a 29-20 lead.

Gurley was MA’s top scorer with 12 points. Karah Nicholson was also in double digits with 10.

The Lady Patriots had lost to the Lady Green Wave by 37 and 31 points in the two regular season match-ups.

“I’m proud of my girls for their play last week,” Coach Ervin said. “Even though we took two losses, we’re playing our best ball right now. I ask them to control the things they can control, and they always do that. Their attitude and effort are never subpar.

“Playing well in the district tournament should give them confidence heading into North State this week. I feel like if we limit turnovers, defend well and finish around the rim, we’re very capable of shocking a number one seed. My girls deserve that.”

The Lady Patriots (10-21) tip off North State play on Thursday of this week at Central Holmes against the host team, the Lady Trojans.