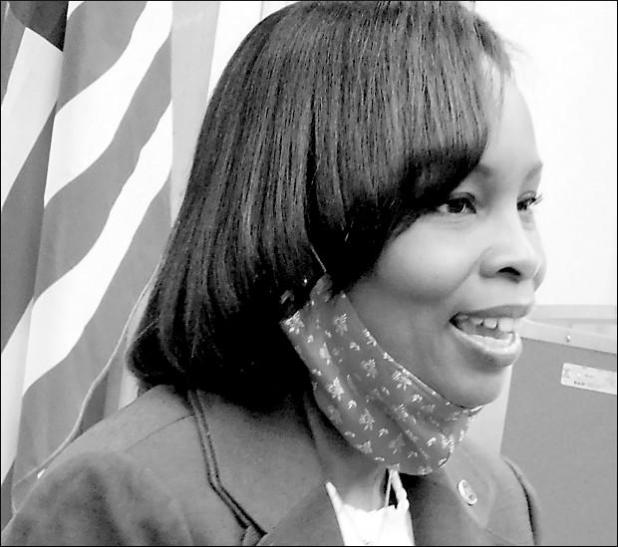 Dr. Ivy Taylor, Rust College’s new president, sat with the Marshall County Board of Supervisors recently for introductions and to discuss plans for the upcoming fall semester.

Taylor said she has arrived at a challenging time, starting her position in the midst of the COVID-19 pandemic.

Taylor was warmly welcomed by the county officials and given a beautiful gift basket from the board of supervisors.

Taylor said she has lived in the south for a while and likes the life, especially in Holly Springs, which is a much smaller community than San Antonio, Texas, where she recently lived.

She said her husband thinks Mississippi will be a great place to retire.

Rust is planning to resume on-campus instruction with limited residents in the dorms, she said. Hybrid classes will include traditional face-to-face classroom instruction and online instruction.

The details must be worked out, especially with regard to sanitation procedures, she said.

Scholarship The board gathered around Antonique Wells, who won a $500 scholarship to Itawamba Community College. She was accompanied by her grandmother Gwen Gipson, little brother Jeremiah Gipson and her uncle James Richmond. Wells is the daughter of Chrystal Gipson and Antonio Wells. The scholarship, awarded by the Mississippi Association of Supervisors, can only be awarded to a student who has ties with a county employee, in this case Gwen Gipson.

Bridge inspections County engineer Larry Britt sought to get a list of bridges that should be put on the inspection round. After several collapses of major bridges in the country, federal highway authorities took over the inspection of state bridges. But now they are letting counties inspect half of them and a consultant the other half, he said. A rule established by the Feds require that a bridge that has been replaced by a pipe for two years is now considered a permanent structure. So those will be taken off the bridge inventory, he said. “The question is, will the county be allowed to put in a bridge to replace a pipe?” he asked. There are five or six bridges that are not considered permanent and will be taken off the bridge list, Britt said. Those include bridge #70 that was replaced by a tanker, a bridge on Odell Road, and bridges #69, #70, #77, #80, #89, and #17.

District 5 supervisor Ronnie Joe Bennett said now that there are pipes available that are five or six feet in diameter, a bridge can be replaced.

Bridge #17 will go off the list if the county abandons the road.

District 1 supervisor Charles Terry asked who gets the land if a road is abandoned.

“It goes back to the landowner,” Bennett said.

Dredging ditches Supervisors discussed over 2,000 feet of ditch that has grown up with trees that are causing water to flood Moore Plantation subdivision off Highway 309 South near Byhalia. The problem is how to pay for it, said Britt.

District 4 supervisor George Zinn III said he would like to break the work of dredging into about three projects and get prices.