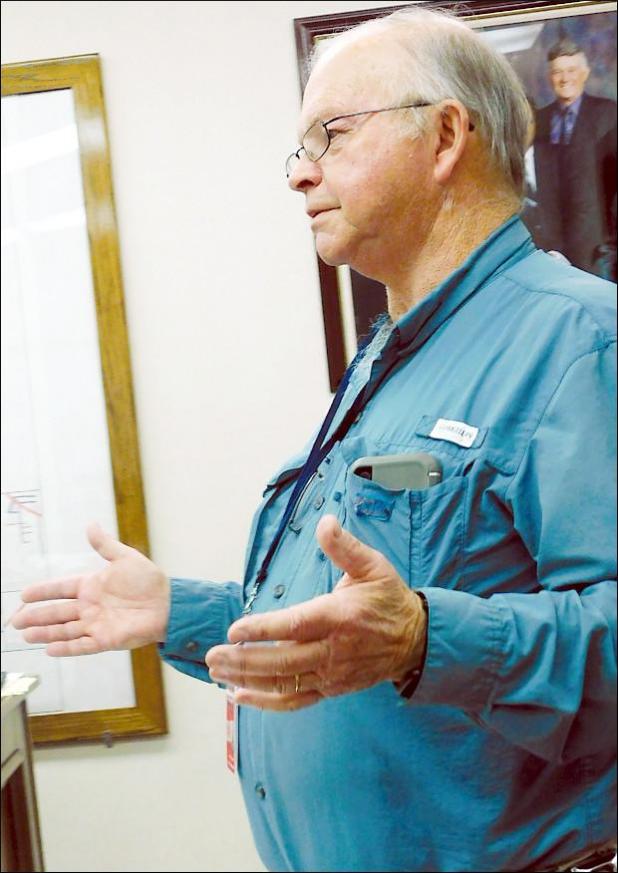 Photo by Sue Watson
Hugh Hollowell, county emergency management coordinator, asks the board of supervisors for a proclamation of a local emergency to prepare for a possible outbreak of Coronavirus.

Emergency management coordinator Hugh Hollowell was cautious about actions Marshall County may take during this time of the Coronavirus scare spreading like wildfire across the United States.

Mississippi saw its first 12 cases identified, mostly in the middle to lower areas of the state, as of Monday.

He advised the board of supervisors on what he is learning.

"There are a lot of moving wheels, right now," he said in the Monday morning board meeting.

"I don't have anything major to present," he said. "The state geared up another conference call for 1 p.m. today. There is not a lot to report. There's a lot on the news but a lot of it is probably hype. But it's a serious situation."

As of Monday, there were no fatalities from the virus so far in the state.

Hollowell said the state is bombarded with decisions on how to handle the looming crisis.

"They are bombarded right now," he said of state officials.

"Nobody's getting tested unless they have symptoms," Hollowell said. "They do not want to waste tests they may need later. Test availability is limited."

"The Health Department said no testing unless there are symptoms."

County administrator Larry Hall explained that a person first calls the doctor's office if he or she has symptoms.

"Then if you do have symptoms, you go to the Health Department and some commercial people will test," he said.

Those who test positive will be directed to the emergency room or ordered to quarantine themselves, he said.

District 1 supervisor Charles Terry said people can go to coronovirus.gov to learn how to protect themselves, use safety measures and preventative measures, and identify symptoms.

Hollowell said the Mississippi Department of Health directs individuals to that same website.

The website will navigate a person as to where to go for a test at the hospital or emergency room, he said.

This COVID-19 scare is the first statewide emergency since Hurricane Katrina, Hollowell said.

"The state is bringing department heads to organize for a response, then that information will filter down to us," he said.

"It's a fluid thing. It's changing hourly."

Persons will be informed of closings, he said.

"Everything is a local or private decision," Hollowell said. "Whatever y'all decide. There are recommendations, because it is a nationwide problem. Supplies are limited - not plentiful and pricey right now - supply and demand."

Terry asked, "What can we do about people buying up all the sanitizer and going outside the store and selling it higher?"

"Price gouging will be addressed," said Hollowell. "There's always going to be some of that."

Hall said the Legislature is looking at what employees can and cannot do.

Hollowell said lots of counties and municipalities are passing local proclamations in case something needs to be done. The Mississippi Emergency Management Agency sent out information to local governments, he said.

Zinn wanted to know if there is a pandemic plan in place.

Hollowell said it is covered in the national plan.

“We have some employees who are high risk,” Thomas said.

Hall read the directions to call the ETNA insurance provider to talk to a doctor - telemedicine.

Following that discussion, the board OK’d a motion to pass a proclamation of a local emergency in case the pandemic spreads upward from the south part of the state.

While the meeting was taking place, two more positives were found in the central and south Mississippi areas bringing the number of active cases in Mississippi at 11 a.m. Monday to 12. As of Tuesday morning, the number in the state was up to 21.

The proclamation will continue for 30 days and be renewed as needed.

City and county schools, private schools and Rust College have all announced closures for various periods due to the pandemic.

Various events have been postponed or cancelled. That list is also being altered regularly after previous announcements, plus additional closures are being announced.

Various community groups are pulling together to help those in need during this ever-changing situation.