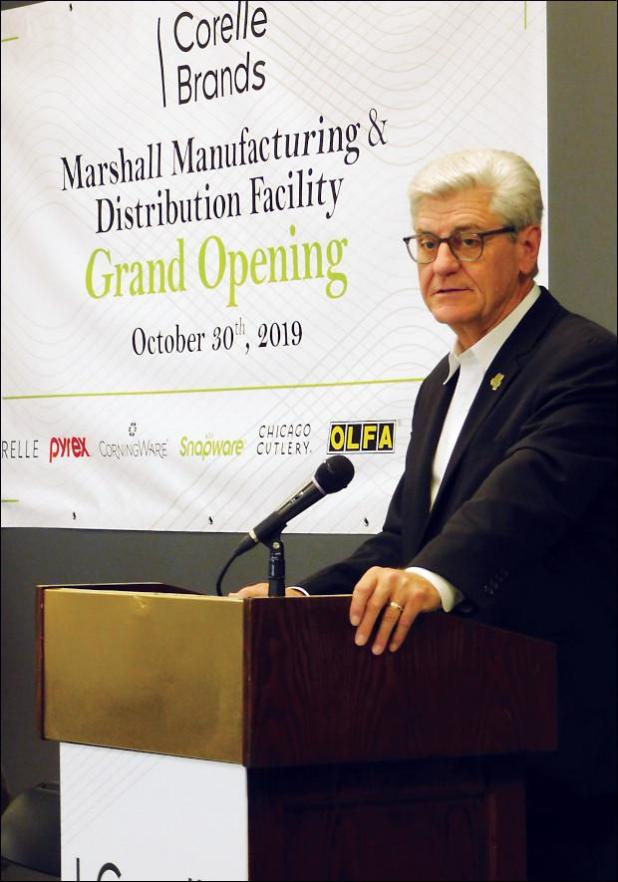 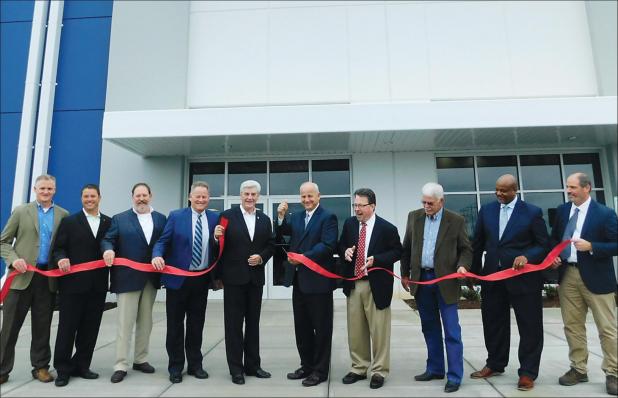 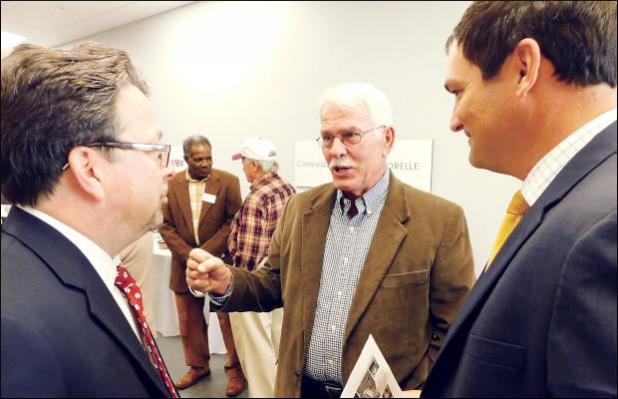 The community was invited to Corelle in the Chickasaw Trail Industrial Park Thursday for an official ribbon-cutting.

Gov. Phil Bryant, dignitaries with state agencies and local elected officials were present to welcome Corelle to Marshall County and Mississippi. Many toured the facility, which is already operational in some of its manufacturing processes. The warehouse and distribution center is still under construction.

Jon Hartman, vice president of North American Operations for Corelle, served as emcee and graciously thanked all partners involved in making the site construction and opening a huge success for the company.

“Justin and Joey (Roberts) from the state made it so easy,” he said.

Joey Roberts is bureau manager for the Mississippi Development Authority.

Governor Bryant, who made two stops at the industrial park, first at Amazon and then Corelle, praised the day as “a great day in Marshall County. I’m impressed.”

“Corelle is something we’ve longed for,” he said.

Bryant went to the Mississippi Legislature to get incentives that landed the deal for Mississippi and North Mississippi.

Saying some people do not believe in incentives, Bryant said, “They are wrong. Look at the people working. They offer not just jobs, but careers.”

Bryant shared a quip he said he made over at Amazon.

“I said welcome to Memphis, the largest city in Mississippi,” he said.

He cited new achievements of Mississippi’s school children, saying the state’s fourthand eighth-graders are leading the nation in math and reading. And citing a decision to improve the education of youngsters, the state implemented a reading requirement that all third-grade students be able to read on grade level before being promoted to the fourth grade.

He said the third-graders in Mississippi are responsible for the scores eighth-graders are achieving in math.

And graduation rates are on the increase, now at 80.4 percent, he said.

And touting the state’s community colleges, he said their graduates cannot only make a living; they can also have great careers.

“Our community colleges are better at workforce training than anybody else in America,” the governor said.

He praised Corelle for its Pyrex cookware, saying his mother and his wife cook with Pyrex.

“I saw Snapware, and said, ‘I just found a Christmas present for the First Lady,’ ” he said.

The state has seen a 259 percent increase in exports from Mississippi, he said.

“We are proud. Now we are moving into instant pop cookers (Corelle’s). It’s going to be under the tree at Christmas,” Bryant said.

And the governor praised Mississippians, who he said will show up on time to work and work.

“We’re called the hospitality state,” he said. “That means more than anything.

Bryant praised the teamwork at Corelle.

In answer, Ken Wilkes, with Corelle, thanked Governor Bryant for his kind thoughts.

“I’d like to echo ‘We’re in it to win it,’ ” he said. “It’s a competitive world. The fact that you weighed in and committed resources was a major factor in our coming to Marshall County.

“Our brands have been around awhile. Our goal is that your children are buying ‘Made here in Mississippi,’ ” Wilkes said, referencing the durability of both Corelle’s products and its corporate success.

Some of Corelle’s team from Los Angeles, Calif., have made the move to work in North Mississippi.

District 5 supervisor Ronnie Joe Bennett spoke briefly saying, “It’s another honor to be here and to see everyone out. It’s like a chain. We work together like a chain. My wife has all kinds of Corelle stuff.”

Bennett thanked MDA, TVA, IDA, Justin Hall and his fellow members of the board of supervisors.

“We don’t want any weak link anywhere in the chain,” he said.

“We try to be as competitive as we can be,” he said.

He thanked Mississippi Development Authority for helping relocate equipment from the California facility and for assisting with the infrastructure at the Marshall County facility.

Freeman thanked Marshall County for grants and tax exemptions. And he thanked Panatonni developers and Alston Construction for working through rain since December 2018 to get the facility ready in 10 months, starting from scratch.

“Over 10 months we have traveled that journey,” Freeman said. “People all over have helped. We were producing products before the fourth wall and roof were up. We thank the people back running the machines for making things happen.”

Whitfield Hamilton, with Panattoni Development Company, said, “This project is the most successful project we have. Four and a half to five years ago we were in a soybean field and here we are. We signed a lease four days before Christmas last year. Construction started immediately.”

The slightly over 1-millionsquare-foot facility makes Corelle the largest manufacturing and warehousing/distribution facility in the industrial park.

While under construction, 86 inches of rain came down on the site since the day of the lease.

When up to full throttle and at steady-state, Corelle will have 450 employees.

Corelle, Corning, Snapware and Pyrex will be manufactured on site and other manufactured products will be brought to the warehouse which will serve the East Coast side of the United States and South-Central region. California will supply the West Coast.

“It will be one of the largest logistics hubs in America,” said Justin Smyers.