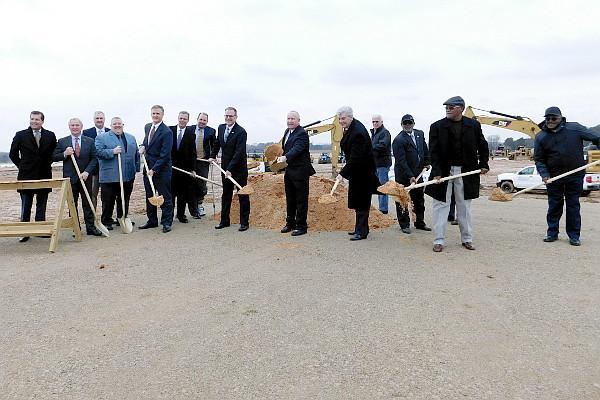 Photos by Sue Watson
County and state officials join Gov. Phil Bryant and Cooper Tire representatives for a ceremony kicking off construction of a one-million-square-foot warehouse. 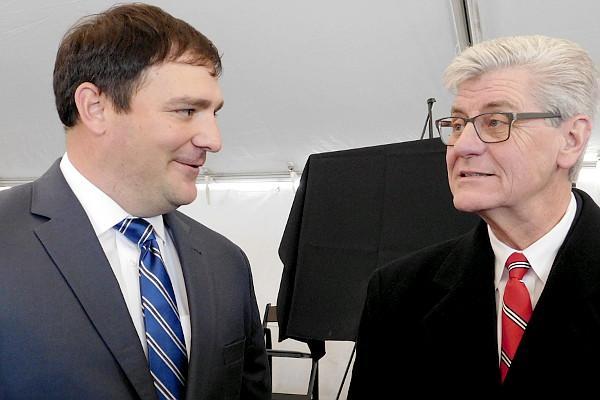 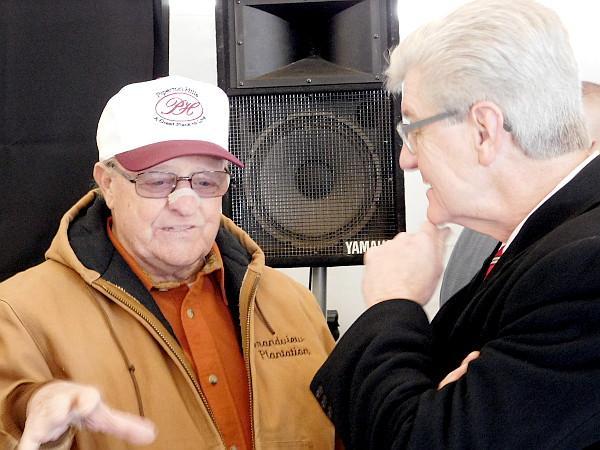 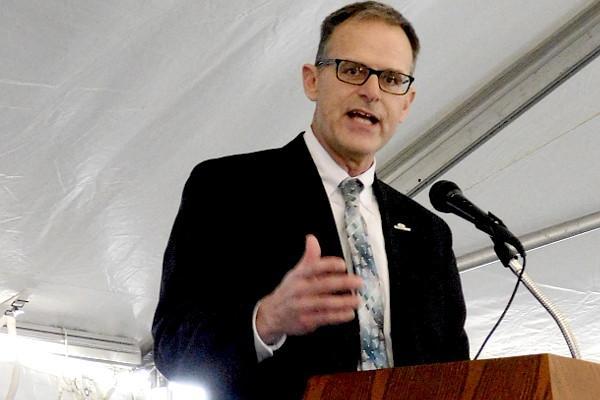 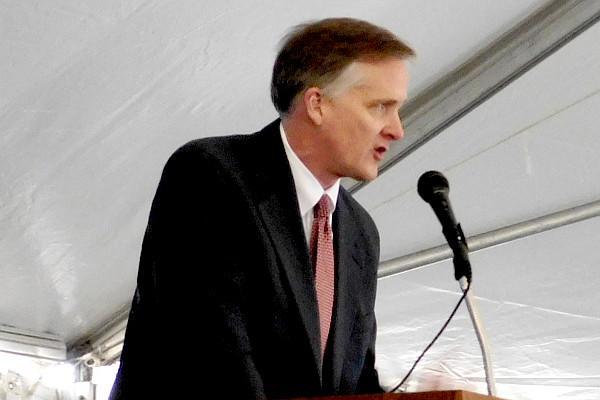 Scott Abbott, senior development manager with Panattoni Development Company, runs through the numbers for what will be one of the largest warehouses in Marshall County.

Gov. Phil Bryant recalled his words at a recent open house for Parker in Holly Springs, that he hoped it would not be long before he would be back in Marshall County to kick off another large economic development project.

He’s coming early and staying late these days to greet local officials, meet with developers of new projects, and to sing the song of jobs and growth.

His trip Wednesday to Gateway Global Logistics Center off Highway 72 in Marshall County was to officially break ground for a new made-to-suit warehouse for Cooper Tire, a company that already has a manufacturing presence in Tupelo.

He bragged on the board of supervisors, saying, “big projects are not for the faint of heart.”

Bryant said Cooper Tire is one of Mississippi’s best businesses.

“We hope their products move in and out quickly to make Cooper Tire be as successful as they want to be,” the governor said.

He also praised Justin Hall, executive director of Marshall County Industrial Development Authority, and the IDA board for their courage in bringing in the project.

“They understand this is where growth is taking place,” Bryant said. “Distribution will be a place for housing.”

He said with a state unemployment rate of 4.6 percent, not a lot of people lack jobs.

“That means a lot of folks from Tennessee will just have to live in Mississippi,” he quipped.

Bob Sager, director of North American Supply Chain at Cooper Tire and Rubber Company in Findlay, Ohio, was also in an exuberant mood.

“I’m not sure if he’s the governor or a salesman,” Sager said. “It’s good to be in Mississippi. Mississippi is a great place for Cooper.”

Cooper has been in the tire business for more than a century, and makes tires for the replacement market – the fifth largest tire manufacturer in North America.

The new distribution facility is located centrally for Cooper’s manufacturing plants and an efficient logistics system will make distribution flexible and responsive.

Sager thanked all parties –  Bryant, MDA, IDA, board of supervisors, Mohr Capital, and Panattoni Development Co. for all their support.

Scott Abbott, with Panattoni, expressed appreciation to Cooper for its trust in building the largest distribution site for Cooper in the United States.

The facility is expected to be completed in fall of 2018.

Cooper will warehouse its products manufactured in Tupelo as well as other products. The facility will serve as a regional distribution center and can be expanded to an additional 400,000 square feet.

The facility will occupy 23.3 acres, or 17.5 football fields, Abbott said.

The truck court surrounding the building is a one-mile loop. Two million yards of dirt – 142,857 dump trucks nose to nose would stretch 622 miles –  the distance from Memphis, Tenn., to Galveston, Texas.

The roofing materials would cover 1,500 homes and 38,000 yards of concrete would constuct a sidewalk from Cooper Tire to Jackson.

Enough steel to make 1,666 cars (3,000 tons) will be used in the construction and 175 miles of wiring in the building would carry enough power to supply 500 homes.

Panattoni has built more than six million square feet of space in three years and invested $27.5 million in the county. The construction has created 380 jobs in the last five years.

“As the governor just said, we are just getting started,” Abbott said.

Panattoni will build Spec 5 building, a $25 million private investment and a pad-ready site to expand to 1.5 million square feet.

“We fully intend for you to be back soon making another announcement,” he told Gov. Bryant.

Panattoni will bring 300 construction jobs in 2018 to the county.

Charles Terry, president of the board of supervisors, welcomed Cooper Tire to Marshall County.

“Thank you on behalf of Marshall County,” he said.

He also recognized all partners on the team including the William Adair family.

“I do believe we have a good team in place,” Terry said.

“We welcome the Cooper team into our Marshall County family. Job creation and name recognition are great for this county.”