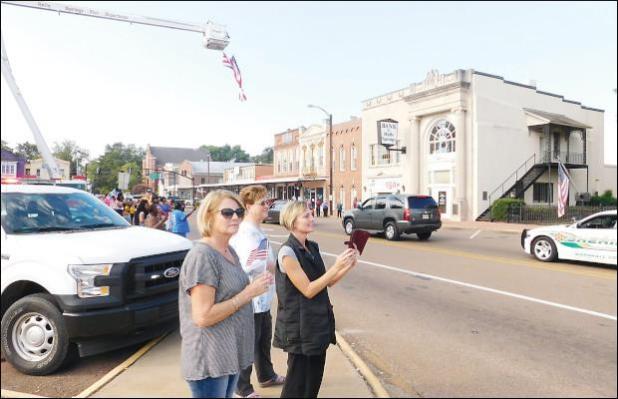 Photos by Sue Watson
Enjoying the patriotic parade in downtown Holly Springs are (front to back) Beverly Cooper, Kristy King and Barbara Rhea. 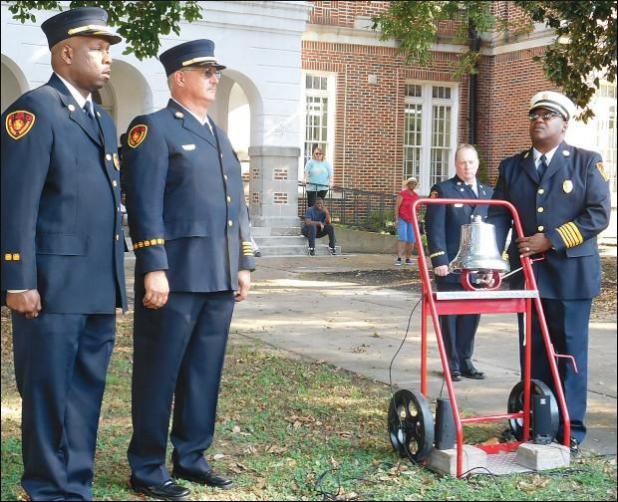 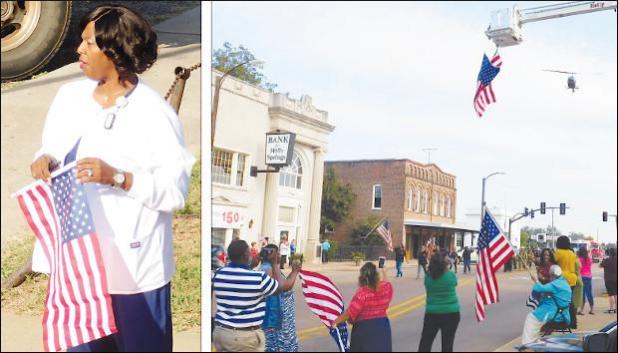 Holly Springs and Marshall County held their first 9/11 parade to honor those who lost their lives or their health September 11, 2001, when hijackers flew passenger planes into the Twin Towers in New York City, New York, the Pentagon in Arlington, Va., and into a field in Somerset County, Penn.

Firefighters, law enforcement, a Marshall County helicopter, and other emergency personnel participated in a parade from the Eddie Lee Smith Jr. Multi-Purpose Center into downtown. With red and blue lights flashing and sirens screaming, the parade passed under a large U.S. flag extended from a fire truck near the end of the route in front of the Marshall County Courthouse.

A parade of foot “soldiers” dressed out in turnouts and other personnel also marched in the parade and people left their offices or places of work to gather around first responders to honor their service to the community.

Many wiped tears from their faces during the playing of patriotic music prior to speeches and the ringing of the bell – nine rings, followed by one ring and the final ring denoting 9/11.

“I played this song because I want everybody here to know we must never forget,” Whiteside said.

It has been just 18 years since the attack on U.S. soil in Washington, D.C., New York City and Pennsylvania. Images are seared into the minds of those who witnessed the collapse of the twin towers at the World Trade Center and a wall of the Pentagon.

The up and coming generation has no memory of it, but those living the day of the attack cannot forget – not the images or where they were when they first learned the United States was under attack.

Also remembered was the grounding of all air traffic for weeks while the U.S. forces sought to determine the source of the attack and develop a response.

Whiteside noted that age 18 is the age a person can join the fire service, and it is also that age of eligibility to vote.

“It’s up to us to educate and lead our youth without prejudice,” he said.

Whiteside reviewed the timeline of the attacks beginning at 8:46 a.m. and ending at 10:07 a.m. with the one in Pennsylvania.

For the first time in history, the FAA grounded all flights over or bound for the continental United States. Some 3,300 commercial flights and 1,200 private planes were ordered to land at airports in Canada and the United States.

In a speech to the nation September 11, 2001, President George Bush assured the nation, “Terrorist attacks can shake the foundations of our biggest buildings, but they cannot touch the foundation of America.”

On August 30, 2019, a U.S. Military court judge in Guantanamo Bay, Cuba, set a trial date of January 11, 2021, for Khalid Sheikh Mohammed and four other men charged with plotting the terrorist attacks of September 11, 2001.

Congress set September 11 as Patriot Day in the United States in observance and remembrance of the victims of the 9/11 attacks.

There are three memorial sites dedicated to remembering the victims of 9/11 – Flight 93 National Memorial in Shanksville, Penn.; National 9/11 Pentagon Memorial in Arlington, Va., and the National September 11 Memorial & Museum, located at Ground Zero at the World Trade Center site.

Whiteside said 9/11 changed much for U.S. citizens, increasing security at airports and various events, including professional sporting events. Schools are secured, national databases are fat with data on Americans, and cameras are everywhere.

“We promised we would never forget,” Whiteside said. “God bless the families of those lost on September 11, 2001, and since that day for illnesses they obtained trying to bring our brothers, sisters, and the citizens they served to safety and out of harm’s way.”

At the end of the service last week, Holly Springs Fire Chief Rodney Crane rang the fire bell 11 times, nine for the month of the attack and twice for the day of the month.

The service was closed with silence, “Taps,” and “Amazing Grace” played with bagpipes.