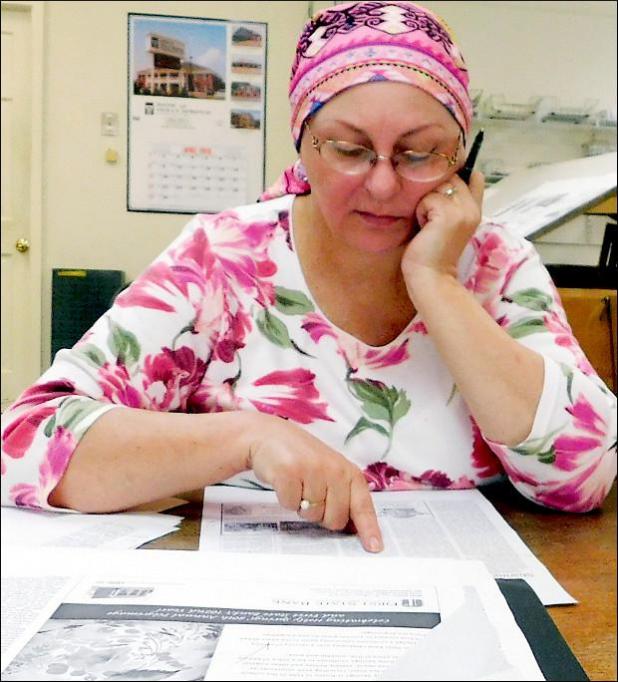 Photo by Sue Watson
Beth Breithaupt was a proofreader and advertising sales representative at The South Reporter for 25-plus years.

Breithaupt – a legacy of giving

Beth Breithaupt, who lost a 10-year battle with cancer Sunday, Sept. 20, is remembered by family and friends for her thinking of others first. She was generous with her time, her resources and her selfless service to others.

At age 50, Breithaupt was diagnosed with colon cancer when she went for her first colonoscopy. While undergoing that surgery, doctors found the cancer had already metastasized to her liver. Following removal of a section of her colon, she traveled to Johns Hopkins University Hospital in Baltimore, Maryland, where surgery was performed to remove about 60 percent of her liver that was involved.

Returning to Holly Springs, she underwent chemotherapy for many years at West Clinic in Southaven.

Her faith was strong that the prayers of others would help heal her of cancer. Her struggle continued until early 2020 when doctors discontinued chemotherapy because of complications. During that period, a number of procedures were used to try and remove spots on her liver and lungs.

This is her testimony as offered by some of her closest friends and associates.

Perry and Elizabeth Breithaupt moved to Mem phis, Tenn., where they lived for a few months before buying a big two-story house on Walthall Street in Holly Springs. Perry commuted to work with the Federal Aviation Administration, where he managed the computers that covered air traffic in a 150-mile radius of Memphis. Their two sons, David and Ben, were born after the move to Holly Springs.

Jeanne Shackleford, whose former husband sold them their house nearly 34 years ago, became one of Beth Breit haupt’s many close friends.

“The main thing is that she always did things with excellence,” Shackleford said. “She went to the nth degree to make it the best it can be. If you asked her to come over, Beth would bring homecooked food.

“And she enjoyed the butterflies, the cats and the flowers. She appreciated the beautiful things of life.”

Breithaupt entertained friends in her home and set large tables of all home-prepared food.

Holidays were her favorite times to invite neighbors to dinner with her family, which included her mother Louise Akins, who moved into a house across the street. And longtime friend and next door neighbor, the late Kate Permenter, was always a regular at her table.

“I got there in 1986 and she got there at the paper a couple of years later,” remembered Linda Jones, now retired from The South Reporter.

“She worked a while and when Ben was born, she took off a few years,” Jones said. “She baked cakes for a while. She had a pretty good business with that.”

Breithaupt was self taught at baking and decorating cakes for weddings and carried food to birthdays and graduations.

Beth’s mother said she began cake making and decorating at age 15. She loved entertaining at her home and held bridal showers and dinners every year on special holidays like Easter, Thanks giving and Christmas.

“The biggest thing - she was a fighter,” Akins said. “She fought this cancer almost 10 years, fighting and not giving up.”

A neighbor often said, “She’s the sunshine in this neighborhood,” Akins said. “She loved holidays and has more friends than anyone I know and in so many places.”

Breithaupt was also big on sending cards for all special occasions, Jones said.

She sent cards to her cousins and aunts on their birthdays, as well, Akins said.

“I’ve never seen anyone fight like she did,” she said. “Beth would always say, ‘It could be worse.’

“Beth has always carried us for those bake sales to give money to the American Cancer Society. She did all that for years. She was in it before me and I’ve been in it for 15 years.

“I always felt like she was a better friend to me than me to her. She prayed for me constantly.”

“Whenever she sent a text, it was a page-long epistle,” Liddy quipped.

Besides newspaper work, Breithaupt served as director of the Holly Springs Chamber of Commerce for a few years between the years when the late Ruth Kloha was director and before the late Susan Jordan took over as director.

Jones remembers Breithaupt for her generosity.

“She was generous to a fault,” Jones said. “She made friends easily and had many.”

Sara Power remembers Breithaupt most for her faith and her attitude.

Breithaupt made dozens of decorated cupcakes for Power’s mother’s 99th birthday. They were served to the residents at Christopher’s.

“They were gorgeous,” Power said. “She’ll be greatly missed. She gave love and she got it.”

“We would talk for hours,” she said. “Her boys (Ben and David) would come to my house and swim in the pool. Her boys were the same ages as my two girls.

“She showed up at my door one day and said, ‘We’re going to be friends.’ She never met a stranger.”

Deles Farley and Breithaupt were friends for years.

“She was one of a kind,” Farley said.

Farley remembers her for her charm and giving spirit.

“She always thought first of somebody else,” she said.

“She used to irritate me to no end with her being late on everything,” Farley said. “Beth had Beth’s time. It’s so funny how I get so tickled later looking back. She was always thinking of one more stop for somebody. She always put people at ease.

I Can See Clearly Now