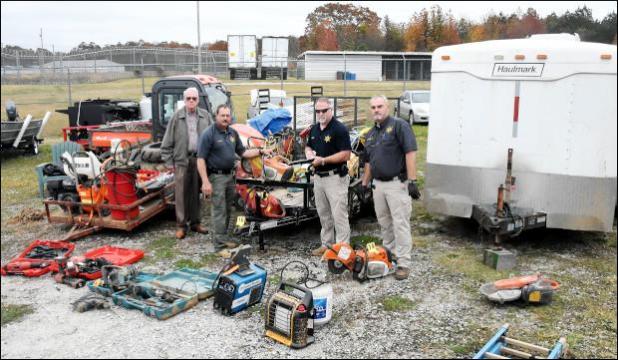 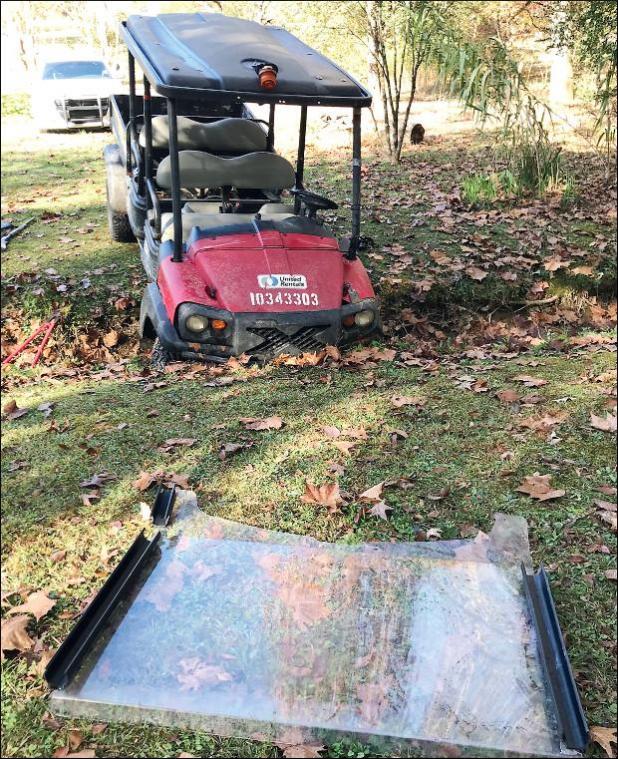 Photo by Kerry Reid
During a pursuit, one of the suspects was driving this four-passenger ATV when it hit a ditch and he was ejected. He ran and was later arrested by authorities.

Heavy tools and equipment, valued between $250,000 and $300,000, have been recovered by investigators from thefts at a number of construction sites in the Chickasaw Trail Industrial Park area, according to Sheriff Kenny Dickerson.

Three suspects are in custody charged with grand larceny and conspiracy, he said.

Investigators were called Friday, Nov. 6, to the 85 Wingo Road area in reference to property theft. A four-passenger ATV was reported stolen along with tools, welders and multiple power tools from a construction site, Dickerson said.

“The ATV had a tracking device which led us to the 200 block of Scenic Drive where the ATV was located along with the individual driving it,” the sheriff said.

An individual at the site fled on the ATV, crashed it into a ditch, and then fled on foot. The suspect was not apprehended but was identified at the Scenic Drive location.

Shortly after the pursuit, Bryor Bailey Edwards, 18, of the 200 block of Scenic Drive, was apprehended and charged with one count conspiracy and one count grand larceny, Dickerson said.

During his arrest, investigators also identified two additional suspects and some stolen property at Edwards’ residence, according to Maj. Kelly McMillen with the sheriff’s investigative unit.

The investigation expanded and moved to the area of 130 block of Lenzi Road where authorities located multiple stolen items inside a 20-foot cargo trailer.

Saturday, Nov. 7, a tip led investigators to a deer The suspect, Ronardo Wilson, 48, of Shelby Drive in Holly Springs, has been charged with one count attempted murder, Harris said, and released from custody on a $75,000 bond.

The incident is still under investigation, Harris said.

Uttering forgery Officers were dispatched to First State Bank at 146 West College Street Friday, Nov. 6, around 12:30 p.m. In reference to a person attempting to cash a counterfeit check, Harris said. When the subject tried to cash the check, the teller took the check and verified it was counterfeit, the chief said. Tramane L. Burton, 32, of the Eads, Tenn., address area, was taken into custody at the bank, then booked and charged with one count uttering forgery, Harris said. He remained in jail Tuesday under a $25,000 bond set by municipal judge Amanda Smith.

Harris said the investigation is ongoing with video tape available from the bank.

The counterfeit check was written for $4,725 on a local construction company, Harris said.

Fugitive returned Torrey Flowers, 45, a fugitive from justice since June 25, has been returned to Holly Springs after signing a waiver of extradition, Harris said. Flowers was charged with two counts attempted murder in a June 25 incident that took place outside Holly Market, he said. Flowers allegedly fired shots from his vehicle into the vehicle of two victims, Chief Harris said. After firing shots, the suspect fled the scene and was apprehended in Memphis, Tenn., on a routine traffic charge and arrested.

A preliminary hearing is set for November 12 in municipal court in Holly Springs.

Flowers is being held on $75,000 bond on each count and remains in jail.

Harris said the altercation between one victim and the suspect began inside Holly Market on North Memphis Street. The two left and got inside their vehicles in the parking lot. Then Flowers allegedly shot into the victim’s vehicle where the victim and his father were seated, and fled the scene, according to the police chief.

All suspects are considered innocent until convicted by a court of law.