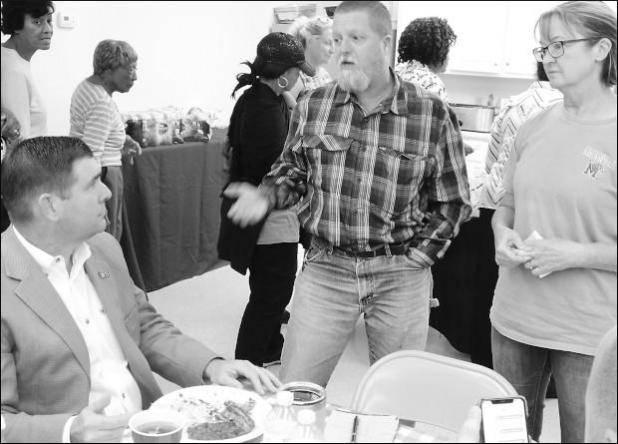 Photos by Sue Watson
Mississippi Commissioner of Agriculture Andy Gipson (left) takes questions and comments from Charles Woodard, a Master Gardener and interested in growing hemp, and Patty Griffin, interested in veterans in farming as an agenda item.

Agriculture ‘backbone of our state’

The fourth annual Lady Landowners Seminar was well attended with Marshall County Homemaker Volunteers, Master Gardeners, and farm men and women filling up the meeting room at the Extension Service to learn more about agriculture.

Andy Gipson, commissioner of agriculture, gave an entertaining and informative overview of what his office does for agriculture, which ranks as the number one industry in the state.

Gipson once was a pastor of a church before his election and he sprinkled lots of humor and some of the Word throughout his entertaining speech.

He praised the attendance, saying that he learned as a pastor “if you want to get something done, ask the ladies.” Gipson lives on the same land he grew up on and helped clear timber to add some pasture in Braxton. He raises beef cattle and timber.

He served in the Mississippi House of Representatives from 2008 until he was appointed commissioner in 2018. He started raising cows at age 13. He cleared pulpwood as a young man and is still growing pine.

During college he built a man cave at home and those “were some of the happiest times of my life,” he said.

Later on he started law school where he met his wife Leslie.

“I knew I was going to marry that girl,” he said.

She made him go and ask her dad if he could date her.

Their wedding reception was held overlooking the same pasture he cleared for cattle at his dad’s house.

Moving on into his speech, Gipson said, “It is a joy to represent the greatest industry in the state.”

“Agriculture is the backbone of our state,” he said.

Agriculture is the number one industry in the state – an $8 billion a year business.

Twenty-nine percent of employed persons in the state work in agriculture or an agriculture-related industry.

“We’re producing far more foods, fiber and shelter than we could ever use,” he said.

Mississippi’s agricultural industry is expected to help feed, clothe and shelter the next generations as the world population pushes toward eight billion. India will be the most populated country, exceeding the population of China. Gipson said Mississippi will want to supply India with the raw products and value-added products it produces.

The commission has 178 employees. All inspections are conducted by the Department of Agriculture.

Every scale used in agriculture is inspected by the department yearly. That includes log truck scales, produce scales, grocery store scales and scanners.

Feeds and fertilizers, pesticides and plants are tested.

The department certifies farmers markets. It supports the Agriculture & Forestry Museum in Jackson and the Mississippi Market Bulletin.

Recently an ag workforce program has been developed. Eligible participants apply for the Workforce Development Internship Program to provide professional and academic experiences related to the Mississippi agricultural industry.

Genuine Mississippi is a program created to promote and bring attention to the incredible range of agricultural products grown, raised, crafted or made in Mississippi.

In his wrap-up, Gipson expressed his love for Mississippi.

“Yes, we have challenges,” he said. “We are literally feeding and clothing the world.”

Gipson noted that Mississippi has signed a deal to provide soybeans and corn for two years - $2 billion in value, and is working on agreements with Japan, Hong Kong and other countries to sell Mississippigrown products.

The state has a massive inventory of timber, he said, because timber right now is abundant.

The state’s poultry industry is No. 1 and timber is No. 2 in the ag industry.

Transportation of timber economically is the biggest challenge the timber industry faces.

Gipson said 95 percent of the world’s consumers live outside Mississippi.

India is to be looked to for the future because of its rapidly rising population.

One problem and threat to the agricultural industry in Mississippi is wild hogs.

“We need to stop studying this issue and kill some hogs,” Gipson said.

“They are a modern-day locust,” he said. “They reproduce so fast, if 70 percent of them were killed in one day, they would repopulate their numbers in a year.”

Gipson then took a swipe at fake meat and noted that the Mississippi Legislature passed a law that prevents fake meat to be labeled as meat.

“Meat must come from livestock,” he said. “It’s the same issue with soy milk which is also threatening the dairy industry.”

The Legislature passed a law to name a hemp task force to create a hemp industry in Mississippi.

Gipson is chair of the committee which will consist of an agronomy committee, a regulatory committee, a law enforcement committee and an economic and development and jobs creation committee. He is to report on the work of the hemp task force committee in December.

Ending his talk on a happy note, Gipson said, “Every farmer knows we are going to get what we sow, what we grow and what we harvest. We are bringing in the sheaves.”

Someone said they ought to pass the (offering) plate.

Gipson said the attendance at this event was one of the largest he has seen as he travels around the state.