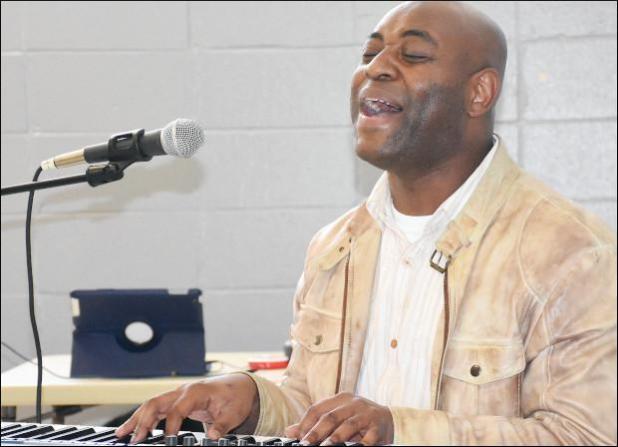 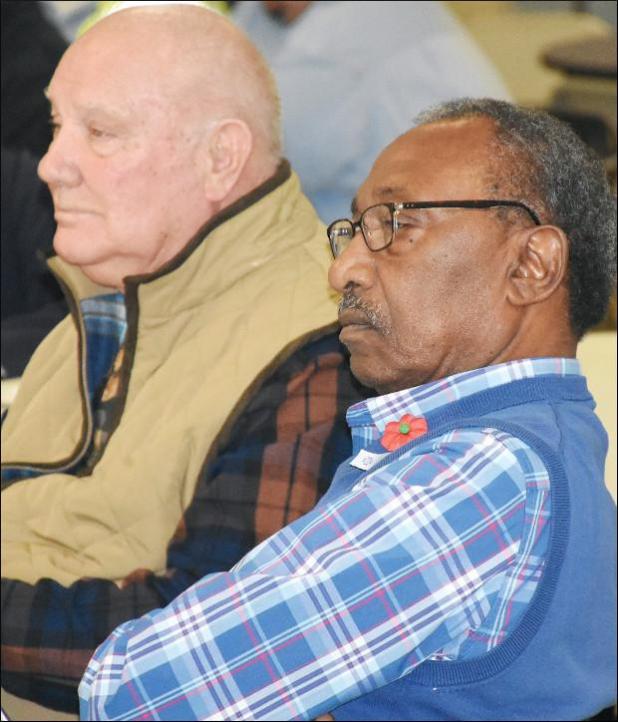 The overriding theme of the City of Holly Springs’ Veterans Day celebration was “thank a veteran.”

“They want to hear you say ‘thank you,’” said retired First Sgt. Calvin James, the guest speaker for the program. “They don’t ask for much, but it’s great to hear the words, ‘thank you for your service.’”

The annual event was held this year on the Friday before Veterans Day at the Sims School Cafeteria.

James said veterans have endured so many things, like separation from their families, well-below-freezing temperatures and the scorching heat.

“They lose limbs, and far too often they lose their lives,” he said.

“If you really love your freedom, thank a veteran.”

James also urged the community to support its veterans.

“Never forget their sacrifice, and go above and beyond to support our veterans and our military,” he said. “Without our veterans, America would not be the America we enjoy today.”

He read “It’s A Soldier,” written by Charles M. Province.

“It is the veteran, not the minister who has given us freedom of religion.

“It is the veteran, not the reporter, who has given us freedom of the press.

“It is the veteran, not the poet, who has given us freedom of speech.

“It is the veteran, not the campus organizer who has given us freedom to protest.

“It is the veteran, not the lawyer, who has given us the right to a fair trial.

“It is the veteran, not the politician who has given us the right to vote.

“It is the veteran who salutes the flag, who serves beneath the flag.

“And whose coffin is draped by the flag.”

“God, help us to properly honor those to whom such honor is due,” he prayed. “We live in a land of the free because of the brave. Inspire us to do more.”

Susie Brown, principal of the Holly Springs Career Technical Center, presented the occasion. She is a veteran of Desert Storm.

“I was proud to be able to don the uniform,” Brown said. “Today, I rest peacefully knowing our troops are on the front line. I have piece of mind.

“And today, to our veterans, I say ‘thank you.’ This is your occasion.”

Cassie Bonner performed a couple of songs in honor of veterans.

Veteran Lee DeBerry displayed a poster with photos of himself and other family members who have served in the military.

“I’m proud of all of them,” DeBerry said. “All served honorably.”

Mayor Kelvin Buck said, “We truly appreciate his sharing the generations of his family who served.”

Veteran Roy Ray emphasized that “freedom is not free,” as he talked about a fellow soldier and friend who lost his life.

On the first Armistice Day in America, November 11, 1919, President Woodrow Wilson gave a speech to commemorate the special occasion.

He said, “To us in America, the reflections of Armistice Day will be filled with solemn pride in the heroism of those who died in the country’s service and with gratitude for the victory, both because of the thing from which it has freed us and because of the opportunity it has given America to show her sympathy with peace and justice in the councils of the nations.”

November 11 of this year marks 100 years since President Wilson spoke these words on the one-year anniversary of World War I. Originally called Armistice Day, it was first celebrated to honor those veterans of the Great War.

It became a national holiday in 1938, and the name was changed to Veterans Day to honor all veterans, both living and deceased, of all wars and conflicts.