Photos by Sue Watson
Chancery Judge Larry Little administers the oath to Kent Smith, who is joined by wife Amanda and sons Jack and Brennan. 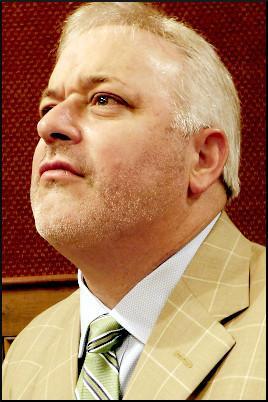 Kent Smith listens to remarks prior to the swearing-in.

After 31 years as an attorney, he’s putting on the judicial robe.

Smith, 54, of Holly Springs, is believed to be the first circuit judge ever from Marshall County.

“I’m honored and humbled to be chosen by Governor Reeves for this important position,” he said. “I look forward to maintaining the standards that have been set by the judges who have served before me. The 3rd Circuit Court District has been fortunate to have some extremely bright and hard-working judges.”

“Kent has been a leader in the legal community in our state for years, working hard to protect the rights of Mississippians and ensure justice for Americans,” Governor Reeves said. “I am grateful that Kent will continue serving the people of Mississippi as circuit judge for the 3rd Circuit Court District.”

A formal investiture could not be held due to COVID-19 restrictions. Smith was sworn in Thursday morning by a longtime friend, Chancery Judge Larry Little.

“This is a joyous occasion to administer the oath of office to a friend and colleague,” Little said.

He read Micah 6:8 — “He has shown you, O man, what is good; and what does the Lord require of you but to do justly, to love mercy, and to walk humbly with your God.”

“Be diligent and show that justice is done,” Whitwell said. “Ethics is of the utmost importance. Be rational, wise, kind and understanding.”

Smith will begin holding court immediately, mostly in other counties. He said he needed to be sworn in quickly and get to work because the courts are really backed up from the shutdown during March and April.

“I have some good ideas on how to move the docket along,” he said.

He also has six months to wrap up things with his law practice clients.

Smith said he had reached a point in his career where he was ready for the judgeship, and he is looking forward to serving.

“I am excited for this opportunity and promise to work diligently to ensure justice is upheld and protected for the people in my district and all of Mississippi,” he said.

“My job is to be openminded and fair and make rulings on the law. I will work diligently to maintain the integrity of our court and give equal justice for all.”

Smith has a long legal career serving the people of Mississippi. Beginning his legal career in 1991, Smith has expanded his expertise to cover governmental law, general civil practice, insurance law, and criminal defense. Admitted to practice law in Mississippi as well as Alabama and Tennessee, he has extensive experience fighting for people in courts from the circuit court level to the United States District Courts in each state. Smith is a member of Smith Whaley, PLLC, where he practices both general civil and criminal litigation. The law firm also represents the Marshall County Board of Supervisors and the Marshall County Industrial Development Authority.

After learning Tuesday afternoon of last week he had been named to the circuit judge position, Smith said his cell phone “went crazy.” He could not count all the texts and phone calls of congratulations. There were hundreds.

“I had well-wishers from all over Mississippi and at least four other states,” Smith said. “I’m so humbled. It makes me feel really good.”

Smith’s appointment term will end in January 2022. A special election for circuit judge will be held in November 2021, and Smith said he will definitely run for the position.