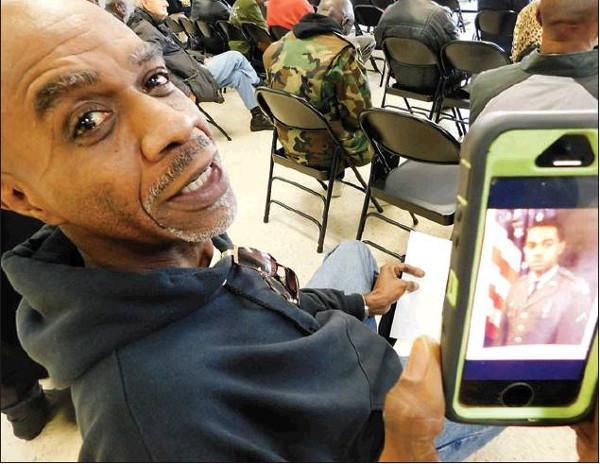 Photo by Sue Watson
Thomas Lester displays a photo of himself in his service uniform.

“I want you to understand what our veterans endured,” said Ret. Lt. Colonel William B. Hollowell.

He was the guest speaker for Marshall County’s annual Veterans Day program. Veterans present were honored for their service. Others in attendance had family members who served and those veterans were remembered, going as far back as World War I.

The program was held this year on the Friday before Veterans Day at the Sims School on West Valley Avenue in Holly Springs.

Hollowell delved deep into the nation’s past as far back as 1775 during the American Revolutionary War, which saw this nation earning its independence from the mother country, England, on July 4, 1776.

Gen. George Washington was America’s first veteran and the Father of our country, Hollowell said.

In this close to 242-year-old democracy a lot has taken place.

The Battles of Lexington and Concord, fought on April 19, 1775, kicked off the American Revolutionary War (1775-83). Tensions had been building for many years between residents of the 13 American colonies and the British authorities, particularly in Massachusetts. The issue: taxation without representation.

In the War of Independence of 1775, about 230,000 soldiers served in the Continental Army.

Then the War of 1812, a trade war, was fought with the British. The White House and Capitol were set on fire.

“The political leadership was left in the woods running for cover,” Hollowell said.

Andrew “Stonewall” Jackson, fought and won the Battle of New Orleans between the British and the United States Army ending the War of 1812.

“Some people say war has been a constant for the United States,” Hollowell said.

In 1846, Texas seceeded from Mexico and was settled in the Gaston Treaty that took in California, Arizona and New Mexico into the United States.

Then in 1861, the American Civil War began, following the Dred Scott Decision that denied citizenship to African Americans. The war was fought over states rights and slavery.

Scott was an enslaved African American who unsuccessfully sued for his freedom and for that of his wife and their two daughters in 1857.

The Civil War took 630,000 lives. It ended with the surrender of Confederate Gen. Robert E. Lee at Appomattox Courthouse in Virginia to Union Gen. Ulysses S. Grant, effectively bringing the four-year civil war to an end.

President Abraham Lincoln ended his second inaugural address with these words: “With malice toward none, with charity for all, with firmness in the right as God gives us to see the right, let us strive on to finish the work we are in, to bind up the nation’s wounds, to care for him who shall have borne the battle and for his widow and his orphan, to do all which may achieve and cherish a just and lasting peace among ourselves and with all nations.”

The Civil War led to the signing of the 14th Amendment which guaranteed citizenship to blacks and secured their ticket toward freedom.

Hollowell shared that he still gets tears in his eyes when he sees the American flag, and he disagrees with athletes kneeling when the national anthem is played.

During the Civil War, 10 cavalry regiments were created, and two of them were black regiments, he said. Those regiments fought in the Indian wars, which, Hollowell said, were very critical to the development of the United States.

The Battle of the Little Big Horn was the only place where the Indians defeated the U.S. Army.

There was then the War with Cuba and afterward the South American War, then World War I, fought in Europe on German and French soil.

Two supervisors, Dixon and Bennett, said they had relatives who fought in World War I.

The signing of the Armistice ended World War I and the name of the day was changed later to Veterans Day to celebrate the service of all veterans. Veterans of World War II are dying at a swift rate.

Those veterans endured the Blitzkrieg, where Germany almost defeated Europe and the Allied powers and the Soviets. During the war the Japanese joined Germany in the fight.

Hollowell said lots of people thought the world was coming to an end during World War II - a very big war and a tough time for Americans.

The Korean Conflict followed and ended without a treaty in two years.

“The war is still ongoing – a war that pitted North against South Korea. It was a war pitting communism vs. democracy,” Hollowell said.

The Cuban Missile Crisis followed and then the Vietnam War that once again pitted the communists of the north vs. the democratically-elected government of South Vietnam.

“It was the first time Americans saw war on the evening news,” Hollowell said.

Other minor skirmishes included the wars in Grenada and Panama.

Later wars included the war in Somalia, Desert Storm, and now a 17-year war in Afghanistan which has cost $19 billion, Hollowell said.

“To summarize, as a country we’re very young and the price our veterans have paid for our democracy is totally priceless. Some have given all,” Hollowell said. “It’s important we keep in mind who we are and where we are as a democracy. God bless our veterans.”

• Jack O’Donnel, relative of the Liddys, who served in the Navy, World War I

• Richard Liddy, who served in the Navy in World War II.

• Robert Liddy, who served in the Korean War.

A meal, prepared by Annie Moffitt, was provided by the board of supervisors.

Note: The South Reporter apologizes for any names mentioned that were missed and left out.